Bud Knox relaxed on a park bench, basking in the April sunshine, his windbreaker zipped to his chin.  A placid man with thinning brown hair, Bud looked nothing at all like a bank robber. ~ Opening to Duke City Split 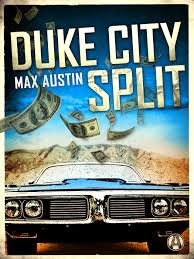 Last year my husband won the Windhammer Commendation Award for Short Gamebook Fiction for a game he wrote about a bank heist.  He's really the reason my antenna went up when I saw mention of this book on tour.  His story put me in the mood for similar type stories, and so I was excited when I first came across mention of Max Austin's Duke City Split.

Bud Knox is your average stay at home dad.  He is raising two daughters, picks them up from school, takes them to their soccer practices, cooks for his wife, and has made a decent life for himself.  Money can be tight, sure, but they make do.  His wife, Linda, is in real estate, and Bud does some internet stock trading on the side.  His real profession, however, is robbing banks.  So, maybe he's not the average dad after all.  Bud and his partner Mick Wyman have been robbing banks together for years and never been caught.  Mick is the complete opposite of Bud. He's the tough guy, the strong arm, the one you look at and know he's probably got a criminal past.

When Mick is approached by a stranger about a lucrative bank job, Bud has some doubts.  The two have been careful to avoid stealing money in their own backyard of Albuquerque, New Mexico.  Things could get messy too fast.  There's also the fact that they have only ever worked with each other.  Who is this new guy and can they trust him?

What follows is an exciting and fun caper mystery about a bank robbery and just how hard it can be to hold onto the loot.  Bud and Mick find themselves being chased by not only the good guys, but the bad ones as well.

It was easy to fall on the side of Bud and Mick, even when the dirty work needed to be done.  I found myself hoping they'd come out on top and evade arrest, even knowing had it been real life I would feel completely different.  There is a lot of action in the novel and some self-reflection, but if you are looking for strong character development, you won't find it here.  Some of the characters are a bit cliche, but they added to the charm of the novel.

Can I just say how much I appreciate Bud's relationship with his wife?  There was no drama about keeping secrets from each other--it was refreshing.

Duke City Split was as entertaining as it was suspenseful and I enjoyed it quite a bit.  I gasped at times and could not help but laugh at others, even as dark as the novel was.  Going in I had not idea this was just one book in three planned.  For those adverse to series, don't dismiss this book outright.  It reads as a stand alone; even the ending seemed pretty final.  I am anxious to see where the author will go with the next in the series.

To learn more about Max Austin, aka Steve Brewer, and his books, please visit the author's Facebook Page or his blog.

I hope you will check out what others had to say about Duke City Split on the TLC Book Tours route!

Many thanks to the TLC Book Tours for the opportunity to be a part of this book tour. E-copy of Duke City Split provided by publisher.
© 2014, Wendy Runyon of Musings of a Bookish Kitty. All Rights Reserved. If you're reading this on a site other than Musings of a Bookish Kitty or Wendy's feed, be aware that this post has been stolen and is used without permission.
Posted by Literary Feline at 3/31/2014 12:00:00 AM