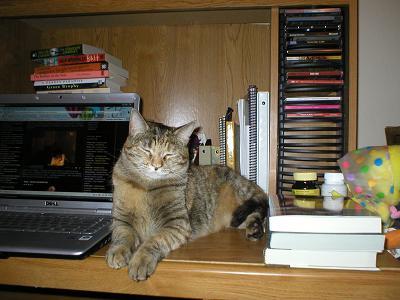 
She was my angel.  So loving and kindhearted.  Gentle and sweet. I first heard about her in an email. Someone's cat had just given birth and homes were being sought for the litter of kittens. I knew my husband would never go for it.  We already had one cat and also a dog.  But I wanted--needed--a kitten.  I felt it deep in my heart.  My husband relented--pretty quickly I might add.

I chose the gray one, sight unseen.  Only, when she arrived at six weeks old, she wasn't gray at all.  A mixture of tiger stripes and tortie. She was beautiful.  I fell in love with her instantly. 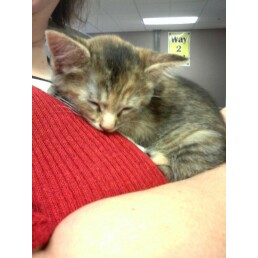 We named her Anya after a character in the television show Buffy the Vampire Slayer. She was a bit of a wild kitten as all young cats are. She loved to play and cuddle.  She would run from shoulder to shoulder, play with my ears, and attack Anjin's feet. She loved to lay on my chest (even when she was full grown) and nurse on my arm. It was always the same spot on the same arm. 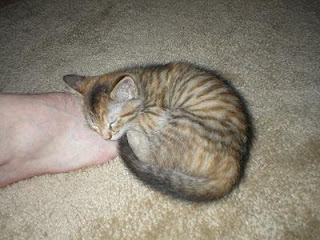 Anya got very sick in early 2010.  We almost lost her.  She had a rare illness in which her bone marrow wasn't producing red blood cells the way it should. She had lost a lot of weight and was in desperate need of a blood transfusion.  She endured daily  medication and weekly/biweekly and eventually monthly blood tests to help her body do what it should have been doing on its own.  Her health stabilized in time and she was off the medication for just over a year.

Parker took his time warming up to Anya when we first brought her home, not willing to accept her right away.  But he came around.  Even he couldn't resist sweet Anya. They often cuddled with each other on the bed or groomed each other.  They fought now and then as siblings do, but mostly got along well. Sometimes they would chase each other around the house.  Parker had the advantage, loving to jump up high.  Anya never was a big fan of heights. 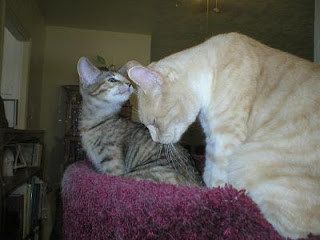 Anya and our dog Riley hit it off instantly. She developed a strong bond with him.  She would often tease him and chase him around the house, wrestling with him too.  Anya loved to rub herself against Riley, circle around him and even walk under him in an effort play with him. 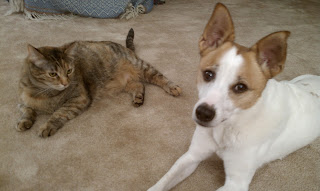 Anya loved attention and had one of the loudest purrs I have ever heard.  When first approaching her, it was best not to go for her head.  She preferred being pet on the back first, and then, once she was comfortable with a person, she would allow him or her to pet her head. She was shy around new people, but if you stayed awhile, her curiosity would get the better of her, and she would venture out to see who was who.  She might hang back a bit or she might come over to say hi.

Our Anya was a talker.  She often said hello to me when I came into a room and let me know when she wanted something.  She and Parker took turns waking me up in the morning, letting me know it was time to be fed.  Anya liked to wake me up by walking all over me and mewing now and then.  Then she would race me down the hall and stairs to meet me at her food dish.  My favorite days though were the ones in which I would get up for work, being extra quiet so as not to wake my husband and daughter.  The four of us, Riley, Parker, Anya and I formed a procession walking down the hall and then down the stairs each morning, often me at the end.  Sometimes though, I'd be first, and I'd hold the baby gate open for each one to pass then follow them down the stairs.  Anya was always the one to look back to make sure I was still there. 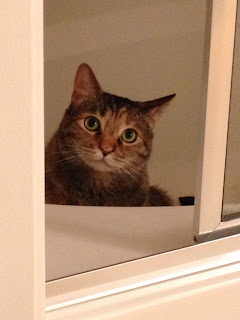 She liked to jump into the shower before Anjin got in, checking it out and then peering out at him after.  She often did that to me too.  She didn't especially like baths, but she liked to spend time in the tub.  Anya's favorite place to lie down was on any blanket or afghan available.  But her preference was always a pillow.  A pile of clothes would do in a pinch.  I cannot tell you the number of times I was doing the laundry only to have Anya plop down on the clothes I had laid on the floor or couch. Every time I sat down on the living room floor with my laptop, set a pillow next to me for my mouse and its pad, Anya would come right over and sit on the pillow with the mouse.  It didn't matter if she sat on the mouse.  She always claimed that pillow as hers.  I would just move the mouse and pad and put it on my other side.  Anya would sleep by my side as I worked.  She was my constant companion.

She endured a break in,  a move, the birth of Mouse, and the death of her best friend, Riley.  Anya often would curl up next to me while I nursed Mouse or comforted Mouse when she was crying. Anya put up with Mouse's antics, being laid on and sometimes chased.  Anya did not mind when Mouse would pet her, and would sometimes seek her out. 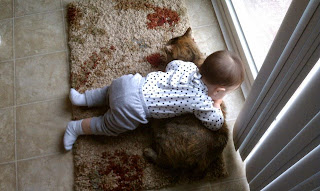 Anya had the softest fur. I loved the feel of it under my fingers. Like most cats, Anya loved to be brushed. And she didn't fight too hard when Anjin trimmed her nails.  And she never minded when I scooped her up in my arms to give her cuddles and love.  She would purr away, content as could be. 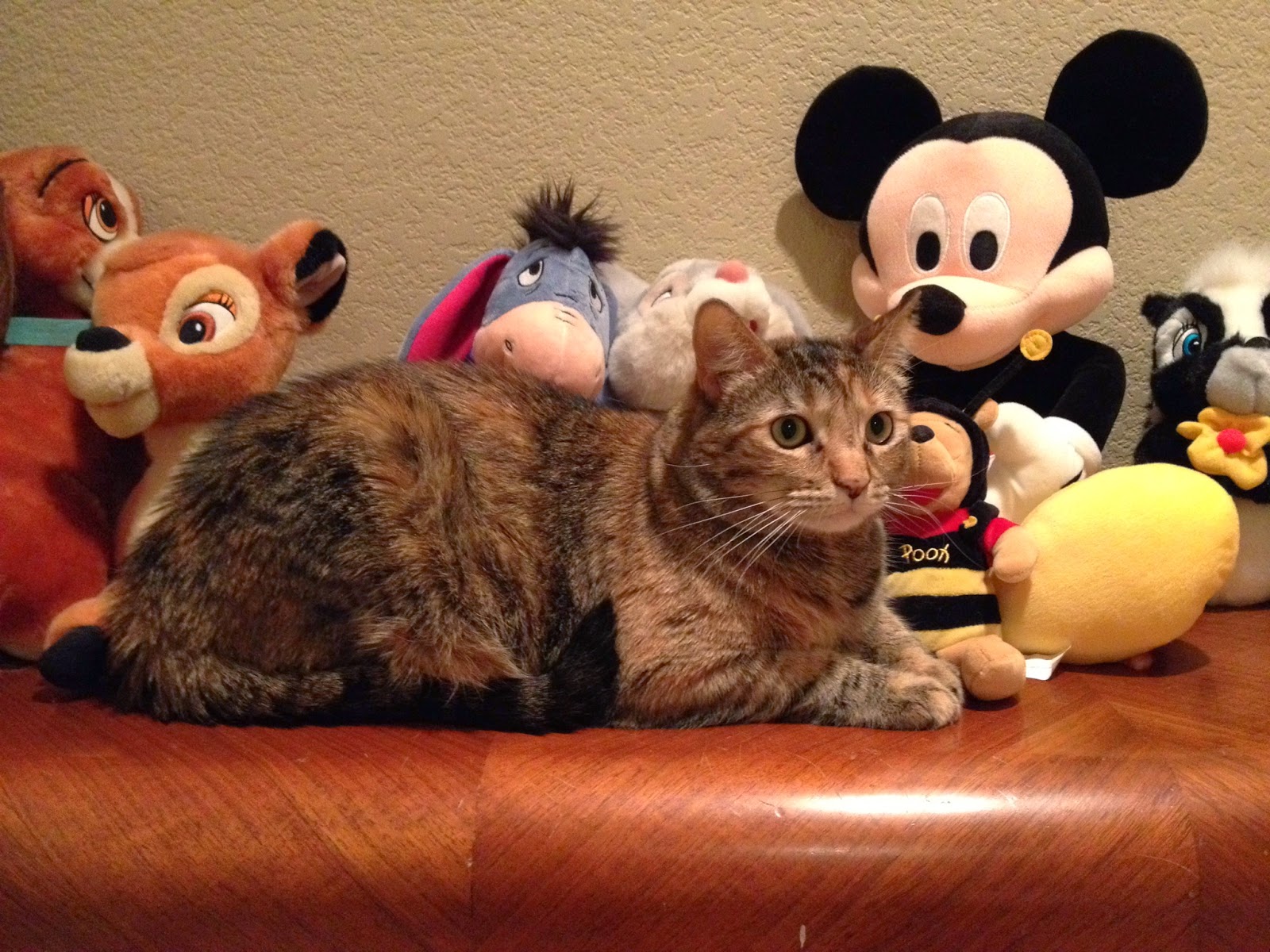 Anya's passing came as a surprise to us all. She had not shown signs of illness. One minute she seemed fine and the next . . .

My heart aches for my sweet Anya.  She came to me at a time in my life when I needed her most. She filled my life with love.   She was only with us for five years, but she made a lifetime impression on us.

To my dearest Anya, know that I love you. Give Riley my best, and may the two of you play together to your hearts' content. 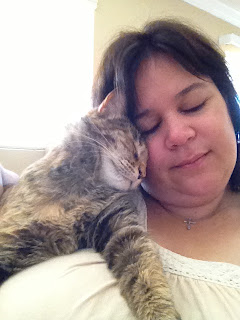