Bookish Thoughts: The Illusion of Separateness by Simon Van Booy 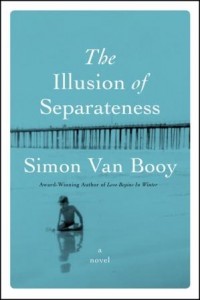 Of all the books I have read this year, there are two that will be gifts for just about everyone on my Christmas (if I can wait that long--birthdays are coming too, after all) list.  One is The House at the End of Hope Street  (review to come) and the other is The Illusion of Separateness.  Both are books that spoke to something inside me.

This was my first experience with a Simon Van Booy novel and what an experience it was!  It is poignant and thoughtful.  Told in a non-linear way, through the experiences of several different people, each story is connected.  This is the story of how one man's act of kindness touched the lives of others.  The novel spans from World War II to the present, introducing a cast of characters who the reader gets to know as the story unfolds.  I hate to say too much because this really is a book best taken in without too much knowledge about it beforehand.

I think my favorite character was John.  He reminded me of my grandfather, and his and his wife's love story made my heart melt.  Mr. Hugo's story particularly touched me, how he struggled and lived his life.  There was Martin, an orphan who was taken in by a French baker and his wife; Sebastian who as a boy stumbles on the remains of a wrecked warplane; Amelia, a blind woman who works for a museum; and Danny whose business is the movies.

The Illusion of Separateness was a beautifully written novel, the language simple and concise and yet the images created an the characters described are so real.  I cannot think of anything negative to say about the book other than perhaps it was too short.  This was a book with heart.  It is a book I can see myself re-reading again and again.

I hope you will check out what others had to say about The Illusion of Separateness on the TLC Book Tours route!

Many thanks to the TLC Book Tours for the opportunity to be a part of this book tour. I received an e-copy of the book from the publisher for review.