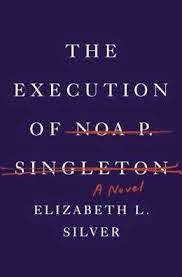 The Execution of Noa P. Singleton by Elizabeth L. Silver

An unforgettable and unpredictable debut novel of guilt, punishment, and the stories we tell ourselves to survive Noa P. Singleton never spoke a word in her own defense throughout a brief trial that ended with a jury finding her guilty of first-degree murder. Ten years later, having accepted her fate, she sits on death row in a maximum-security penitentiary, just six months away from her execution date.

Seemingly out of the blue, she is visited by Marlene Dixon, a high-powered Philadelphia attorney who is also the mother of the woman Noa was imprisoned for killing. Marlene tells Noa that she has changed her mind about the death penalty and Noa’s sentence, and will do everything in her considerable power to convince the governor to commute the sentence to life in prison, in return for the one thing Noa is unwilling to trade: her story.

Marlene desperately wants Noa to reveal the events that led to her daughter’s death – events that Noa has never shared with a soul. With death looming, Marlene believes that Noa may finally give her the answers she needs, though Noa is far from convinced that Marlene deserves the salvation she alone can deliver. Inextricably linked by murder but with very different goals, Noa and Marlene wrestle with the sentences life itself can impose while they confront the best and worst of what makes us human in this haunting tale of love, anguish, and deception.

I sat on a jury once.  It was a murder trial in which a man was accused of murdering his live-in girlfriend. Both had been drinking extensively and engaged in a domestic dispute.  He killed his girlfriend, beating her with his hands and feet and a hand held vacuum cleaner.  I found the entire criminal court process . . . interesting.  I had worked in a courtroom for years, but only in the juvenile dependency court.  So, the criminal case was a new experience for me.  The information that could be entered into evidence, the way the attorneys made their arguments, the instructions to the jury . . . I came away from that experience feeling a bit disillusioned and not too confident in the entire jury trial process.  At least not in the case I heard.  It's hard to be when no one cares about the juror sleeping off a hangover during testimony or the jury foreman who asked his fellow jurors to keep in mind the defendant's age when condemning him to prison time despite having just been instructed by the judge not to take that into consideration because it wasn't relevant to whether he had in fact committed first degree murder.

And so Noa P. Singleton's story was not surprising.  I have worked with a variety of attorneys over the years--some inexperienced, others burnt out or apathetic.  They were mixed in with the good ones.  One of my favorite juvenile court attorneys was a court appointed one, not a private attorney brought in from the outside.  So the stereotype of court appointed attorneys not being the best advocates for their clients isn't always true.  That's neither here nor there.  In terms of the book, however, what most stood out for me was Noa's experience with the court process and how, unfortunately, realistic it was portrayed.  It's clear from the novel that the author is well versed in criminal law and the ins and outs of the courtroom, particularly in criminal cases involving someone without much money.

I was caught up in Noa's tale right from the start.  The novel is told from her perspective, in first person with the occasional pause for letters written by Marlene Dixon to her daughter, the murder victim.  The two narratives offer a glimpse into both Noa's mind and Marlene's.  Their stories are intertwined right from the start.  Their relationship is an interesting one, one that creates more suspicion at first rather than understanding.

The author has a gift for only offering a piece of the mystery of how and why Sarah was killed here and there, keeping the suspense building and the reader wanting to know more.  Neither Noa or Marlene are particularly likeable characters.   Neither are very reliable as narratives--or are they?  It's a question that I kept asking myself as I continued to read.

I never really connected with Noa. Being isolated on death row had given her a lot of time to reflect on her life and the direction it had taken.  We learn about her childhood and her relationship with her parents, particularly her absent father who suddenly reappears in her life.  She hadn't had an easy life, and I could see how her behavior and attitudes led her to make the decisions she did.  Still, I never quite got a handle on her.  She seemed disconnected from her own life and the people in it.  Was this a reflection of her current situation and isolation or was it really a part of who she was?

Marlene brought in her own complications.  She said she had a change of heart about the death penalty, but Noa suspected an ulterior motive from the start--and as the reader, I did too.  It was in the way Marlene presented herself and the words that came out of her mouth.  I just didn't trust her.  Truth be told, I trusted Noa more.

I admit going into the novel I expected a rather fast read, but I didn't find it to be so.  Elizabeth L. Silver is a descriptive writer.  Whether that was a part of Noa's character or just Silver's style, I am not sure.  Add to that the fact that the reader spends so much time in Noa's head, philosophizing and analyzing things, it slowed the pacing of the book down.  At times I didn't mind at all as I found it interesting, but other times I wished I could hurry the book along.  I really wanted to get to the truth.  What happened to Sarah?  Why was she killed?  What was Noa's role?  And what about the motive?  All of this remains a mystery until the end of the book.  And, although by then the truth comes less as a surprise, there are still some surprises to be had.

When I finished reading The Execution of Noa P. Singleton, I wasn't immediately sure what I thought of the book.  On the one hand, I did enjoy it.  On the other, I felt a bit unsatisfied.  Ultimately though, I am glad I read the novel and feel that, as a whole, it was a worthwhile book, one that is particularly thought provoking.

To learn more about Elizabeth L. Silver and her book, please visit the author's website.

I hope you will check out what others had to say about The Execution of Noa P. Singleton on the TLC Book Tours route!

Many thanks to the TLC Book Tours for the opportunity to be a part of this book tour. I received an e-copy of the book from the publisher for review.