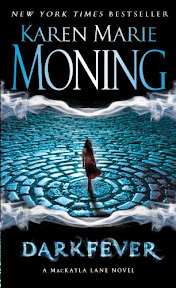 Despite the high praise given to author Karen Marie Moning, I avoided her books like the plague for the longest time.  I associated her with romance, which is a genre I only like in small doses--and only if it's a side dish and not the main course.  Well, was I ever surprised when I decided to give her Fever series a try. Darkfever is the first book in the series and it is dark with a small dose of funny mixed in for good measure.  I loved it.

The author uses her first novel in the series to set up her world, and what a world it is!  MacKayla Lane is quite content with her life in Georgia.  At least, that is, until her sister is murdered while studying aboard in Ireland.  With little movement on the investigation, Mac decides to head to Dublin herself to spur the case on, hoping perhaps her physical presence will do the trick.  All she has is a frantic voice mail from her sister, left just hours before her death.  Almost from the moment Mac steps foot in Ireland though, she realizes something is not quite right--and her life will never be the same.  She is soon swept up in the world of the fae, both the light (Seelie) and dark (Unseelie).  She is one of the rare humans who can see the fae in their true forms--which makes her a danger as well as a target to them, particularly the Unseelie who are up to no good.

In Dublin she meets the mysterious Jericho Barrons, who makes it plain he doesn't think much of her.  Mac attracts his attention when she inquires about a book her sister told Mac she needs to find before anyone else does--a very powerful and world-altering book.

MacKayla isn't exactly a heroine I normally would find myself drawn too--at least upon initial description.  She describes herself as a Barbie doll--and in some respects she does fit the stereotype.  She's pretty and concerned about clothes and her manicure.  And not in a Buffy sort of way.  She grew on me though and proved more than once she can hold her own against some pretty evil fae.

The male lead, Jericho, is awfully rough around the edges, and I am still not quite sure what to make of him.  He has too many secrets and things would go a lot easier for him in regards to getting Mac's cooperation if he was a little more honest.  Just saying.  Then there's Vlane.  I flat out don't like the guy.  I don't care how beautiful he may be.  And the Unseelies, or dark fae, in the novel are scary as all get out.  I wouldn't want to run into them on the street--or anywhere for that matter.

The Dublin setting is perfect for the novel and the world building the author has done to create the foundation for her series is very intricate and well developed.  I lost myself in her world from the moment I read the first chapter and never looked back.  I felt like I was a part of the story, experiencing it as I read rather than just reading words on a page. Isn't that how a good book should make us feel?


To learn more about Karen Marie Moning and her books, please visit the author's website.

Source: I purchased an e-copy of this book for my own reading pleasure.