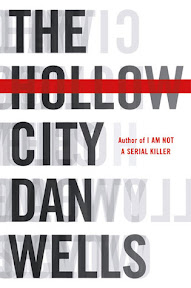 I initially became interested in this book after reading Suey's review.  Written from the perspective of a man recently diagnosed with schizophrenia, the book leaves the reader in a constant state of wonder about what is real and what is delusion.

Michael Shipman is afraid of electronic devices, particularly cell phones, afraid they are transmitting signals and spying on him.  He doesn't know exactly who is after him--or why--but he knows someone is and they are up to no good.

Because of Michael's violent behavior and talk of Faceless Men, he comes to the attention of the authorities who are investigating a series of murders by a killer dubbed the Red Line Killer.  The killer seems to be targeting members of a cult, a cult that murdered Michael's mother years before.

What follows is a complex tale of a man in the throes of mental illness, struggling to figure out what is true and what is not.  The reader, too, is kept wondering.  As I read, I felt like I was reading a thriller with possible elements of science fiction and at other times a character study.  Who or what is real, exactly?  Is any of it?  Michael is an unreliable narrator to be sure, but he is a sympathetic character, and I really felt for him as the story went on.

Writing from inside the head of someone suffering schizophrenia is nothing new, but it is always interesting to see what direction an author will take it.  Dan Wells does a good job of drawing the reader in, earning our trust, and taking us to a rather unexpected place.

Just the same, I wasn't quite as taken with the book as I would like to have been.  It took me awhile to settle into the book, getting used to being in Michael's head.  But once I did, I was hooked.  Yet somewhere towards the end, I was pulled out again and it felt like I was reading a different novel.  The funny thing is, I knew the direction the book would go--somewhat, anyway--from the synopsis I'd read before reading the book, and so it wasn't as if I was surprised.  I didn't expect it to turn into a book with a "message" however.
By the time I finished the novel, I couldn't help but think of a book I'd earlier in the year, Michael Faber's Under the Skin.

The Hollow City is the kind of book that is great for discussion, especially the ending which is open for interpretation. I don't want to discourage anyone from reading this book because it has a lot going for it.  I am glad I read it.


You can learn more about Dan Wells and his books on the author's website.

Source: I purchased an e-copy of the book for my reading pleasure.