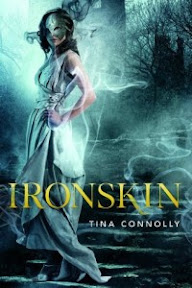 The moor was grey, battlefield grey. It had been five years since the last fey was seen, but out here Jane could almost imagine the Great War still raged on. Grey mist drifted through the blackened trees, recalling the smoke from the crematory kilns. That was a constant smell in the last months of the war. [opening of Ironskin]

I went into Tina Connolly’s Ironskin completely blind. I had no idea what it was about. I thought maybe pirates, but I’m pretty sure now I was confusing it with another book. There are no pirates in Ironskin. Instead, what I found as I began reading the novel was a mesmerizing world set in a time and place where the industrial revolution never happened. Where humans had once relied on the fey for magic and technology, only to have gone to war with them, seemingly having driven them out and were now rebuilding and resuming as much a normal life as possible.

Jane Eliot is a governess, scarred by battle in the Great War. She carries a fey curse with her and must wear an iron mask on half of her face to keep the curse in. The curse is anger which seeps out and affects everyone around her if left unchecked. Jane can’t seem to hold onto jobs long, but sees promise in an ad for a governess at Silver Birch Hall in which a young girl is in a “delicate situation”. Jane is sure the girl has been cursed in a similar way as herself. The man of the house is Edward Rochart, whose comings and goings are rather mysterious.

Silver Birch Hall is old and in somewhat of a ruined state due to the Great War. It’s on the edge of a forest known to be home of the fey. Oh, what I wouldn’t give to explore that house and the surrounding grounds! It sounded beautiful and yet a bit frightening all at the same time.

If, by now, the story sounds a bit familiar, you would be right. Ironskin is a loose retelling of Charlotte Bronte’s Jane Eyre. There are actually quite a few similarities between the two books. Jane Eyre is one of my all-time favorite novels, and so it’s a story I know well and love. When I realized how closely the two books were to each other in terms of the story, I got a little nervous. Tina Connolly, however, added her own touches, including the familiar yet very different setting, to Ironskin making it a very different book. Still, it was hard not to make comparisons as I read.

I really liked Jane. She is a strong heroine, steadfast in her desire to help her young charge, despite all the obstacles that came her way and the frustration she felt at times. Much of the novel is about Jane as she works with the young girl, sorts out her feelings for Edward and, most especially, comes to understand her own curse and situation better. And always there, off to the side, is the threat of the fey’s return and what that might mean.

I was quite taken with Ironskin for the first three fourths of the novel. It was romantic and enchanting with a good dose of suspense. The tension had been building, the mystery well woven, and I was anxious to find out what would happen next. And then suddenly it seemed as if I was reading a horror novel, which threw me for a bit of a loop. Clearly the author had been building toward something. Yet the twist seemed a bit off from the rest of the novel just the same. And then the main character did something I didn’t feel was in character. Upon reflection, it is probably just me, my own hopes and expectations for the character and the direction the book might go getting in the way—but it bothered me nonetheless.

Will I read the next book in the series? Absolutely. I like the world and characters Tina Connolly has created and hope she will take us back there.

To learn more about Tina Connolly and her book, please visit the author's website.

I hope you will check out what others had to say about Ironskin on the TLC Book Tours route!

Many thanks to the TLC Book Tours for the opportunity to be a part of this book tour. E-copy of Ironskin provided by publisher.