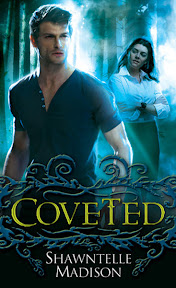 
I was in the mood for a little urban fantasy, and thought I'd give Shawntelle Madison's series a try. A werewolf in therapy sounded too good to pass up.

Natalya Stravinsky isn't your typical urban fantasy heroine. Nat has an anxiety disorder and is obsessive compulsive; not only does she require everything in her home to be extra clean, but she also keeps her vast holiday collection neat and tidy--even as it threatens to take over the house. Nat needs to rejoin the local werewolf pack or else risk being targeted by the Long Island pack trying to take over the territory. Unfortunately for Nat, her old pack refuses to take her back--her mental health issues marking her as too weak--and she is left to fend for herself. And if that wasn't enough, it appears the Long Island pack wants her dead at all cost.  In an effort to get her life back on track, Nat re-enters therapy and joins a therapy group. She even asks a coworker on a date--although she probably should have heeded her friend Abby's warnings about dating a necromancer . . . . Oh, and Nat's ex-boyfriend (their break-up being the reason she turned to Christmas ornaments as a salve), Thorn, is back and there are still definite sparks between them.  Only, as the alpha's son, he's promised to another woman.

The author has created an interesting world full of just as interesting supernatural characters, including a mermaid afraid of water and a muse with her own issues. They make for an entertaining bunch. And let me just say for the record I'm rooting for the wizard. He's not only available, but he and Nat are in positions to hold each other accountable in their effort to resolve their problems--not to mention he has a certain charm about him that is hard to resist. Chances are though, Thorn will get the woman in the end given the heat between them and their shared past. I am curious to see how it plays out in future books.

Nat is very attached to her family even if most of them aren't too fond of her given her pack status (or lack there of). They are all she has, however, and she will do anything she can to hold onto them and the life she's created in South Toms River, New Jersey. Nat is a likable character. She has her issues, sure, but that makes her all the more "human" and relatable.  As the story progressed, it is clear Nat has some hidden talents that haven't yet been fully explored.  Between her and her motley crew of supernatural friends, there is nothing they can't do.

I enjoyed the book overall but didn't love it. It's hard to put my finger on why exactly. There were a couple of plot points I wish had been explored further, but they were relatively minor issues. There are funny moments to be sure, and some sexy ones as well. I look forward to reading the next book in the series.