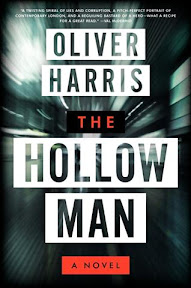 Detective Constable Nick Belsey is down on his luck and rather disgruntled. Having met with financial ruin, homeless, and on the brink of losing his job, he sees an opportunity open up when a wealthy Russian oligarch goes missing in what appears to be a suicide. How easy would it be for someone like Nick to step into the man's shoes for just a little while? Just enough time to get some cash and flee the country and start a new life . . . or that's the plan anyway. Only, Nick is more than a little good at his job as a detective and can't let a mystery go unsolved. It would seem the man whose life he has stepped into has a few enemies, not to mention has come under the scrutiny of Scotland Yard.

This is not a fast paced thriller, but once it got its hooks in me (which was pretty much from page one), I didn't want to stop reading. The writing is beautiful, capturing the mood and tone of the London setting and story perfectly: a bit dark and brooding while at the same time intelligent. There are subtle nuances to the story and characters that I think could be overlooked if not read more carefully. And yet, if missed, probably wouldn't hurt one's enjoyment of the story--it just wouldn't be as fulfilling.

I wasn't sure what to make of the protagonist, Nick Belsey, at first. He begins the novel in a bad place, having just crashed a stolen police car while drunk. It becomes clear soon enough that he has a problem with gambling and doesn't mind bending the rules, sometimes outright breaking them. He's a man who has lost his direction in life and wants only to escape. His behavior, particularly his criminal activity, doesn't exactly lend itself to making him a well liked man, but as the story unfolds, I found myself rooting for him--and yes, even liking him. I can't say I ever felt sorry for him though. His vices are kind of hard to overlook.  I got the impression though, that despite his best intentions to jump onto dark side, he has a strong sense of justice, however convoluted that may be.

The Hollow Man takes readers into the world of identity theft, corporate greed and corrupt power. The story, as are the characters, is multi-layered and complex--my favorite type of crime fiction novel. I thoroughly enjoyed Oliver Harris's novel.


To learn more about Oliver Harris and his books, please visit the author's website.

I hope you will check out what others had to say about The Hollow Man on the TLC Book Tours route!

Many thanks to the TLC Book Tours for the opportunity to be a part of this book tour. Copy of The Hollow Man provided by publisher.