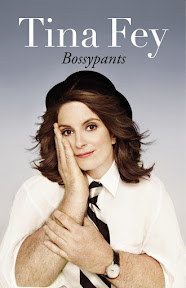 I tend to steer clear of celebrity memoirs, preferring memoirs by the "average joe". Stardom doesn't impress me much, although I do occasionally like the rags to riches stories. If they come with a good dose of humility and thoughtfulness. Anyhow, I had heard great things about Tina Fey's memoir Bossypants. Laugh out loud funny. Smart. Relatable. And after my husband endorsement of it, how could I not give it a try?

I found Bossypants to be all it was totted to be. Especially the more personal bits about her childhood and her own early experience with motherhood.

The story of Tina Fey turning the reversible Snow White/Sleeping Beauty Doll over so that Snow White was showing touched a chord with me. Her daughter would turn the doll to the other side, displaying the yellow haired beauty. Tina's effort to instill an appreciation for the dark haired beauty, which more resembled her daughter seemed to be for naught--even at her daughter's age of three. While my 7 month old doesn't have a reversible doll, I find myself favoring her dark haired dolls for the same reason.

The chapters about her father touched me as well. Our fathers come from the same generation, commanded the same respect and shared similar values. Tina frets that her daughter doesn't have that same fear/respect of parent that she had for her father and I had for mine, a quality we both see as having been a positive influence in our lives even if we didn't think so when we were growing up.

The book is hilarious and I found myself laughing out loud frequently. There were also tender and more serious moments, which I appreciated as well. I admit I didn't know who Tina Fey was until the whole Sarah Palin impersonation. At least not more than a general recognition of the name. I am not a fan of 30 Rock (never seen it) nor was I watching Saturday Night Live when she was writing and appearing on the television show. Somewhere in there though, I came to respect her and admire her work. Bossypants was an enjoyable book to listen to, and Tina Fey does an excellent job telling her own story.
Source: I bought this audio book on audible.com.