It was a hot summer day in August. The temperature was hovering around 104 in the shade. Everyone, including Mouse, was trying to stay cool inside. Dressed in her lightest onsie, Mouse lay on her stomach in the middle of the play mat, propped up on her elbows.

Miss S was busy with Howler and Sunshine who were playing not too far away. That left Rosie, sitting pretty eating a red Otter Pop*. A mighty cool looking stick. In fact, as Mouse looked around, she noticed everyone was sucking or chewing on an Otter Pop, each one a different color. Why wasn't she given an Otter Pop? She was always being left out. At nearly six months old, she was just as capable as the rest of them. Hrmphf.

Well, she'd show them. Mouse took one last look around to make sure no one was watching and made her way on all fours over to Rosie. Quick as she could, Mouse snatched the cold wet stick out of Rosie's hands, intent on finding out what she was missing.

Rosie let out a howl almost as loud and painful as one of lil' Howler's cries. Miss S rushed to her aid, swiping the Otter Pop right out of Mouse's hand. Miss S called Miss C over and both were laughing. At what exactly, Mouse didn't know. All she knew was that it wasn't fair.

She eyed Rosie, who was now sitting on Miss S's lap on the other side of the play mat, with that irresistible red Otter Pop. Determined to get that Otter Pop one way or the other, Mouse half crawled, half scooted her way across the mat, right up to Miss S's leg. She pulled herself up onto Miss S's thigh and snatched the Otter Pop right back. Ha!

Peels of laughter came from both Miss S and Miss C, who was standing near the mat. Miss C took the Otter Pop out of Mouse's hand before Mouse could take a bite. 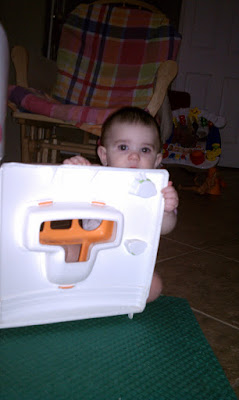