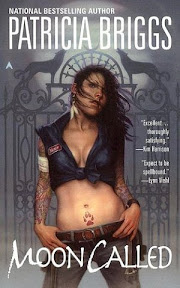 I didn't realize he was a werewolf at first. My nose isn't at its best when surrounded by axle grease and burnt oil--and it's not like there are a lot of stray werewolves running around. She when someone made a polite noise near my feet to get my attention I thought he was a customer. [1st paragraph]

I do love a good urban fantasy novel and Patricia Briggs' novel Moon Called, the first in the Mercy Thompson series, lived up to its reputation. Why did I let this book languish in my TBR collection for nearly five years?

Mercy Thompson is a mechanic who specializes in German cars. She also is a walker with the ability to shift into a coyote at will. When a young man appears on the doorstep of her garage to ask for a job, Mercy can tell right away he is a werewolf. Going against her better judgment she hires him and soon trouble follows. Not only is Mac a new werewolf not yet in control of his new found form and strength, he is also being hunted by some very bad supernatural beings. Mercy turns to her next door neighbor, Adam, the Alpha of the local werewolf pack, for help. Forced on the run when Adam himself becomes a target and his teenage daughter kidnapped, Mercy goes to the only place she can think of for help: the reservation where she was raised. Not everyone there is happy to see her, but they do what they can to help.

I took to Mercy right away. She has her edgy side, but she also knows when to play by the rules. She's still got that undeniable independent streak that urban fantasy heroines often have and will do as she pleases regardless of what others may say. She's smart and knows her weaknesses. The other characters in the novel compliment her well.

As technology and science become more prolific and advanced in modern society, the risk of exposure is far greater. Traditions and the old ways are being compromised. Patricia Briggs begins to set the stage for the day when the supernatural must come out of the closet. One group already has, that of the lesser fey, and the results were mixed. The reception and fitting in of the supernatural among regular ol' folk is nothing new in urban fantasy, but it is always interesting to see how an author tackles the subject, especially in a world of her own creation. The author does a good job of setting the foundation for Mercy's world and making it believable. I especially like the history she provided of the various supernatural beings in her world. She gives the reader just enough to whet your palate and leave you eager for more--at least she did this reader.

The suspense and intensity only increases as the story unfolds. There's a hint of romance with plenty of mystery and action. Moon Called won me over from the first page and if the other books in the series are as good as this first one, it will definitely become a favorite series. You can bet I'll be pulling that second book in the series off my TBR shelf much sooner than it took me to get to this one.
You can learn more about Patricia Briggs and her books on the author's website.