Review: Blood of My Brother by James LePore 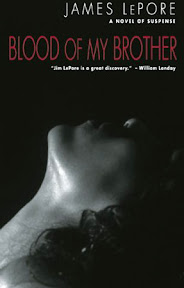 Linda extracted a card from her purse and handed it to Jay. Turning it over, he wrote on the back, "Linda, Take no prisoners. Jay." he showed her what he had written and, putting the card in his wallet, said, "I'll send you the Santaria documents tomorrow. You can use them and Kate Powers's letters when you learn that I am dead, or when you get his card in the mail, whichever comes first." [excerpt from Blood of My Brother]

Blood of My Brother by James LePore
The Story Plant, 2010
Crime Fiction ; 313 pgs

Last year I had the opportunity to read and review James LePore's A World I Never Made, a complex novel about a father and daughter's relationship amidst a tale of terrorism and intrigue. I was swiftly taken in by the author's writing and the complexity of his characters and their stories. And so, when offered the chance to read his latest book, Blood of My Brother, I was eager to give it a try.

Jay Cassio is a successful attorney whose best friend is murdered by professional hit men. Danny had been his savior time and time again when they were growing up in New Jersey. Danny's death appears to be connected to a couple of other murders in what the police have ruled as a murder-suicide. But Jay has information that leads him to suspect otherwise. As Jay digs deeper into his friend's murder, the more trouble he finds himself in. Not only is the FBI out to stop him, but he is being targeted by some very powerful people involved in money laundering and the drug trade.

Jay's only chance at exposing the truth and coming out on top is to find Isabel Perez, the beautiful Mexican woman who he believes lured his friend to his death and may hold the secrets to bring down the bad guys once and for all. Isabel's own life has been marred by cruelty. She wants nothing but to escape the bonds holding her down since she was a young teenager--that and to exact revenge against those who have enslaved her.

The novel got off to a slow start for me but soon took off. It is an intense book, right up until the end. I was most drawn to the scenes when the author takes the reader back into the characters' pasts, giving us a taste of why the characters are who they are today. Isabel especially has had a difficult life. She has proven to be a strong and resilient woman time and time again, fighting for her own survival in a world she had so little control over.

As enjoyable as it was, I wasn't as taken in by the characters of Blood of My Brother as I had been of A World I Never Made. I was wrapped up in the action of the book but never quite felt close enough to the characters. Regardless, Blood of My Brother is suspenseful read, one I couldn't wait to see how it would end.
You can learn more about James LePore and his books on the author's website.