From the Archives: Review of Pillars of the Earth by Ken Follett

I began keeping a reading journal several years before I began blogging. The following are my thoughts on a book I read in January 2005. 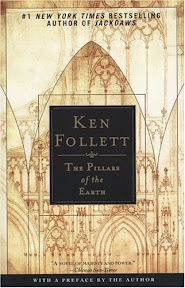 The Pillars of the Earth by Ken Follett
Signet, 1990
Historical Fiction; 983 pgs

An epic tale set in England in the 12th century during a time of unrest as the crown is in question and civil war erupts. The book opens with a man being hung for thievery and a vengeful woman cursing the men who had made the accusations: a priest, a monk and a knight. The lives of several characters are intertwined as the tale unfolds. Ken Follett crafted an intriguing novel involving politics, faith, rivalry and ambition.

Readers are introduced to Tom the Builder and his family, Tom being a moral and hardworking man. His dream was to build a cathedral and after suffering poverty and several losses, he finally was able to do so with the help of Prior Philip, a pious and just man. Philip was one of my favorite characters—his faith was strong and unwavering. He had a good and generous heart and strove to be just and fair throughout his life. It seemed as if every delay and obstacle was thrown in the way to stop the creation of the cathedral and yet Philip and Tom’s perseverance remained. Aliena Bartholomew was another favorite character; her strength, resilience and ability to better almost any situation she was in was admirable. The main female characters, although not always taken seriously or thought much of, were indeed strong women and not to be underestimated, even Countess Hamleigh who was usually scheming to better her own family’s end. My least favorite character by far was William Hamleigh and I actually found myself wanting to throw the book across the room as I read about his hateful deeds. He was a foul and whiny man, easily given to bad temper without any conscience or self-control. And then there is Bishop Waleran Bigod, a man who was ambitious and would do anything to move up in the world no matter who he stepped on regardless of the means he used to reach the end.

I thoroughly enjoyed this novel. It came highly recommended by several people, and I just happened to have a copy. The characters were well developed and the story entrancing. I had a hard time putting down. Considering how long the book was, I was surprised I was able to read it as quickly as I did!

Source: I bought this book used several years ago, probably through E-Bay, back in the days when I used to bid on entire lots of books because it was inexpensive and fun. Plus a great way to fill out a series.