The Skin Gods by Richard Montanari 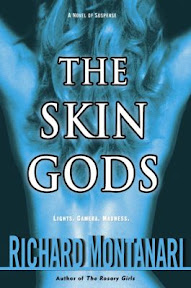 First Sentence: “What I really want to do is direct.”

Reason for Reading: Richard Montanari caught my attention with The Rosary Girls three years ago, and I was eager to read another one of his books. This seemed like good bedtime reading in between War and Peace and Breathless in Bombay.

Comments: There comes a moment in every crime novel when everything falls into place and I know. Sometimes is happens sooner than at other times, but it is rare when a book takes me by complete surprise. I do not intentionally set out to solve the crime on my own, however, it is the direction my mind automatically takes as soon as I begin reading a crime fiction novel. Of course, there are occasions where the author introduces the killer or villain right off the bat and his or her identity is not a mystery. The motive and the chase then become the mystery. I will let you decide which category this particular book falls into.

Detective Kevin Byrne is recovering from a near fatal head injury and is not sure he wants to return to the force. However, when he learns that the killer who almost took his life is out pending an appeal, he figures the best place for him to be is back in the trenches of the Philadelphia Police Department’s homicide unit. His timing could not be more perfect.

Detective Byrne, his partner Detective Jessica Balzano, and FBI agent Terry Cahill are assigned to discover whether or not they have a new murder to investigate. A popular horror movie had been spliced and what appeared to be a real life murder scene inserted at a crucial point in the film. With little to go on, the two detectives have their work cut out for them. One murder leads to another, each proving to be more gruesome than the one before. The detectives are determined to find the common thread between the murders in order to stop the killer in his tracks. The investigation takes the police into the underbelly of pornography and the glitzy world of a Hollywood movie.

Like with The Rosary Girls, Robert Montanari has swept me off his feet with this thrilling novel full of suspense and intrigue. Jessica Balzano has grown up a lot since she first joined the homicide team and it shows in The Skin Gods. She is competent and strong and not afraid to kick ass when necessary. She is loyal to her partner and dedicated to her job. Her partner, Kevin Byrne, is a little worse for wear. He has been through a lot and it shows. He is a papa bear who will protect those who he loves at any cost, including risking his own good name and possibly his life.

The Skin Gods had me on the edge of my seat with my hand over my mouth right up until the end. I am looking forward to reading the author's next book, Merciless.

Visit Richard Montanari's official website for more information about the author and his books.
Posted by Literary Feline at 1/28/2008 05:00:00 AM