The Society by Michael Palmer 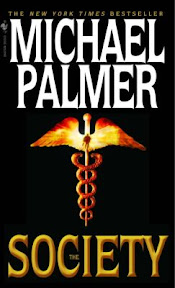 Reason for Reading: I came across The Society soon after it was published and added it to my Mystery Guild order back when I still belonged to the club. The novel has set on my shelf for 3 years now (*hanging head down in shame*). It was a perfect fit as my second selection for the Medical Mystery Madness Challenge and my final choice for the Summer Mystery Reading Challenge.

From the Publisher: At the headquarters of Boston’s Eastern Quality Health, the wealthy and powerful CEO is brutally murdered. She’s not the first to die—nor the last. A vicious serial killer is on the loose and the victims have one thing in common: they are all high-profile executives in the managed care industry. Dr. Will Grant is an overworked and highly dedicated surgeon. He has experienced firsthand the outrages of a system that cares more about the bottom line than about the life-and-death issues of patients. As a member of the Hippocrates Society, Will seeks to reclaim the profession of medicine from the hundreds of companies profiting wildly by controlling the decisions that affect the delivery of care. But the doctor’s determination has attracted a dangerous zealot who will stop at nothing to make Will his ally. Soon Will is both a suspect and a victim, a pawn in a deadly endgame. Then, in one horrible moment, Will’s professional and personal worlds are destroyed and his very life placed in peril.

Rookie detective Patty Moriarity is in danger of being removed from her first big case—the managed care killings. To save her career, she has no choice but to risk trusting Will, knowing he may well be the killer she is hunting. Together they have little to go on except the knowledge that the assassin is vengeful, cunning, ruthless—and may not be working alone. That—and a cryptic message that grows longer with each murder: a message Grant and Moriarity must decipher if they don’t want to be the next victims.

Comments: Occasionally I read a book that upon finishing, I immediately think, "Gee, that would make an entertaining movie!" This is one of those times. Admittedly, the books I most often have this thought about tend to include intense action sequences. What can I say? I love a good action flick.

Michael Palmer has a good reputation as a medical thriller writer, and so I was excited about reading one of his books for the first time. After the first several pages, I began to have doubts, worried that the book would become too preachy about the negatives of managed health care. Regardless of the fact that I agreed with the main character’s concerns regarding the state of the health care system in the United States, I do not care for being lectured when reading a novel. Fortunately, those doubts were soon laid to rest as the story took off at break neck speed. Mr. Palmer sets the political stage quickly and moves on, adding real life anecdotes into the story where appropriate, and returning to the politics only as it suits the story.

Dr. Will Grant is one of those characters that is almost too good to be true--intelligent, charming, charitable, good at heart, and a good surgeon. Never mind that he has a crazy ex-wife and heavy financial burdens. His counterpart in the novel, Detective Patty Moriarity, balances out his gentleness with her toughness. She is the daughter of a colonel of the state police and knows she has to prove that she is qualified for the job on her own merits. She is another one of those strong female characters who I enjoy reading about, one who does not require a man to save her at the end of the day. There is nothing helpless about Patty.

Although I figured out at first glance who was behind the murders, The Society still made for an entertaining book to read. Would Will be able to get out from under the scandal that had been thrust on him? Would Patty be kicked off the case? And what exactly is the motive behind the murders? Is it as clear-cut as the police seem to believe? Or is it something more sinister? When the truth does come out and the motive becomes clear, well, it's horrifying.

Fast placed, intense, and entertaining, The Society had me on the edge of my seat through most of the book. Suspension of disbelief is a must, although the concerns and problems surrounding managed health care today in the U.S. must not be disregarded out of hand.

Favorite Part: There are several strong female characters in this novel, including Susan Hollister, Grace Peng Davis, Patty Moriarity, and Gloria Davenport. My favorite of the bunch is probably Patty, although Grace Peng Davis comes in at a close second. She had a difficult life and even with her most recent troubles, she remained strong and spirited.

The “Doctor Laywer” Augie Micelli was also among my favorite characters. When it came down to it, he came through for his clients.

My favorite scene of the novel is perhaps one of the most unbelievable moments, I’ll be the first to admit. Unfortunately for you, I have to remain mum or else I’d be giving too much away.

Note about the Author: American Visit the author's website to learn more about him as well as his books.

Miscellaneous: My issues of Bookmarks and The New Yorker came in the mail today! Yay! I wonder if I will actually fit reading time in for them. I have a nasty habit of letting magazines pile up . . .

Oh! And best of all, I learned from Kris over at Not Enough Books that I won a copy of Slipknot by Linda Greenlaw in a recent drawing she held. It's the first in a promising new mystery series. I know, I know. Just what I need, to start another series.
Posted by Literary Feline at 8/17/2007 07:43:00 PM