A Garden of Vipers by Jack Kerley 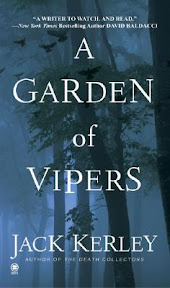 A Garden of Vipers by Jack Kerley
Onyx, 2006
Suspense/Thriller; 375 pgs

First Sentence: “Are you sure he ran this way?”

Reason for Reading: I enjoyed Jack Kerley’s earlier books in the Ryder and Nautilus series, and welcomed the chance to I revisit the two detectives. This is my final selection for the Southern Reading Challenge.

Comments: I always enjoy stepping into Jack Kerley’s world for a little while. He offers up a taste of the South, an entertaining and complex story, and characters I cannot help but enjoy spending time with. A Garden of Vipers had its share of excitement, that’s for sure.

In the third novel of the Carson Ryder and Harry Nautilus series, the detectives set out to solve a brutal murder of a young reporter. As their investigation unfolds, they uncover a web of dark secrets, conspiracy and vicious crimes—all of it seeming to lead to one of the most wealthiest and powerful families in Mobile, Alabama. Getting too close to the truth puts their lives on the line, and it is just a matter of time before it all comes to a head.

In this particular novel, the politics of bureaucracy do not play a part as it had in the first novel and to a lesser degree in the second, which provided an opportunity for Ryder and Nautilus to work their case unfettered. They really are good at their jobs and getting to the truth; both smart men and on top of their game.

I like Jack Kerley’s writing. His hard-boiled style, sprinkled with wit here and there, makes for good reading. Mr. Kerley captures the police culture and heart of his characters in such a way as to put the reader right there in the pages of the book. He weaves his story together seamlessly, the twists and turns offering a surprise here and there,although all the while leaving a logical trail. Jack Kerley just keeps getting better and better.

Favorite Part: One of my favorite parts came early on in the novel when Nautilus and Logan are racing to the scene of the crime and fighting over who will get the case. Does that really happen?

On a more general note, one of my favorite spots in this and the other two novels in the series is Carson Ryder’s house. It’s right on the water and there's a since of quiet and calm about the place that offers a break from the harried excitement of Ryder's life. When Ryder gets in his kayak to free his mind, I wouldn't mind going along for the ride.