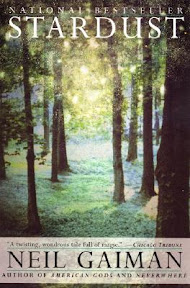 First Sentence: There was once a young man who wished to gain his Heart’s Desire.

Reason for Reading: For years I have been curious about Neil Gaiman’s Stardust but it took the coming of a movie to finally motivate me to read it. This is my first selection for the Saturday Review Challenge.

Comments: What a wonderful story! I had no idea what to expect when I first began reading Stardust other than what the back of the book had to offer (and the recent movie trailer for the upcoming film). I had heard that Neil Gaiman’s writing in this book was quite different from his others, and while I have only read one other book by Mr. Gaiman, I can at least say it was very different from American Gods, which I read earlier this year.

Different is not a mark of better or worse, however. Stardust was delightful and entertaining, while American Gods was darker and more thought provoking. I was reminded of William Goldman’s The Princess Bride in story and in style.

Tristran Thorn lives in the village of Wall at the turn of the Victorian era. Wall is situated next to the wall that separates the land of Faerie from Tristran’s home in the “real” world. Once every nine years, there is a magical fair in which visitors from all over venture past the wall, through a single gate, into the meadow that lies just beyond. At all other times, the gate is guarded to ensure that no one crosses the gate from Wall into the Faerie.

When a star falls from the sky, Tristran promises the lady he loves that he will retrieve it for her in exchange for whatever his heart desires, be it marriage or perhaps simply a kiss. He sets off for the other side of the wall where he will encounter people and creatures of myth and face challenges unlike any other. As it turns out, Tristran is not the only one looking for the star. There are others who seek it out for darker purposes.

Stardust is both a love story and a coming of age story. Uncomplicated in his prose, creating a quick and rather lighthearted story smattered with darkness here and there, Neil Gaiman has fashioned an unforgettable fairy tale that will no doubt remain one of my favorites.

Favorite Part: I liked the hairy little man quite a bit. The book doesn’t go into depth about the characters, which works well for the story and the style in which Gaiman wrote the story. Just the same, I would not have minded learning more about some of the mysterious creatures and beings Tristran encounters along the way.

Miscellaneous: Anjin and I are enjoying the second season of The Wire on DVD. The second season is just as good as the first. One of my favorite characters died in an episode we watched today. I knew it was coming, but it still made me sad.

We also saw the movie Hairspray this weekend, the new musical version, which I thoroughly enjoyed, but then, I am a big fan of musicals. It was very uplifting and definitely worth seeing in the theater.
Posted by Literary Feline at 7/29/2007 05:00:00 PM