The Septembers of Shiraz by Dalia Sofer 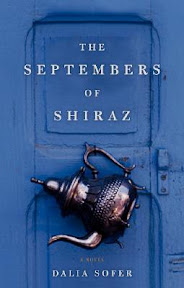 The Septembers of Shiraz by Dalia Sofer
Ecco, 2007
Fiction; 338 pgs

First Sentence: When Isaac Amin sees two men with rifles walk into his office at half past noon on a warm autumn day in Tehran, his first thought is that he won’t be able to join his wife and daughter for lunch, as promised.

Reason for Reading: The subject matter and setting drew me to this title when I discovered it on the publisher’s website. As a result, I put my name in to preview this book through the Harper Collins First Look Program.

Comments: Before the Iranian Revolution, the Amin family enjoyed a relatively good life in their home country of Iran. Isaac Amin earned a good living as a gemologist, working hard to support his family. The fall of the monarchy and the rise of the Islamic republic changed everything for Isaac, his wife and their two children, a nine-year-old daughter and a college-aged son. Whereas before their status and wealth were something to be proud of, the new tide in Iran found them looked down upon and blamed for past oppression. Their lifestyle was seen as a crime.

Just as Isaac is preparing to join his wife and daughter for lunch, he is arrested and taken into custody. Not knowing what charge is being levied against him, Isaac has no idea what fate has in store for him. He is taken to a prison where he is interrogated frequently and tortured for his perceived lack of cooperation. Through all of this, his wife, Farnaz, has not a clue where her husband is being held, and so she must carry on as best she can, facing a persecution of her own.
Shirin is only nine-years-old at the time of her father’s arrest. At first she is told her father is on a trip, but quickly learns the truth. Confused and scared, Shirin goes about her life as best she can, coping in the only way she knows how.

The son, Parviz, had been sent to the United States to attend the university in New York. His parents most wanted to avoid his being drafted into the Revolutionary Guard and to allow Parviz to carry out his dream of studying architecture. Parviz’s kindly landlord Zalman Mendelson, a Hassidic Jew, takes pity of Parviz and his situation, his loneliness and lack of financial help from his parents due to conditions in Iran.

The contrast between the lives of the characters plays out in several ways throughout the novel. There is the interplay between Isaac and his interrogator Mohsen, who had once been in Isaac’s place, the recipient of the torture and endless interrogations but who now has power because of his position and religion. There is also Shirin’s friendship with Leila whose father is in the Revolutionary Guard. It is the relationship between Farnaz and her Muslim housekeeper, Hebibeh, that is the most telling, however. Their cultural and class differences are now in the limelight, threatening to divide them at a very difficult time in Farnaz’s life.

Religion also plays a part throughout the novel. The Amins, although non-practicing, are Jewish, which in and of itself is a mark against the family under the new government. Parviz’s landlord’s family is extremely religious and Parviz finds himself examining his own faith during a time when he feels most lost. Isaac also begins to seek answers both within his own faith and that of Islam by studying the Koran. Despite this, the religious theme as well as the characters’ own spiritual journeys are subtle and therefore readers should not expect deep insight in this particular area.

The narrative is relatively simple and not overly descriptive. I would have liked to see the characters fleshed out more. Although the anguish, confusion and heartache could be felt throughout the novel, I was still left wanting a deeper look into the hearts and minds of the characters. Even with that, however, the author, Dalia Sofer, allows her readers to experience her characters’ suffering and to have hope for them and their future. Overall, The Septembers of Shiraz, the author’s debut novel, is a moving and thought-provoking novel well worth taking the time to read.

Favorite Part: Of all the characters, Shirin captured my heart the most. My favorite part of the novel, the one that made me sad to some degree and yet proud of her at the same time, was when she took it upon herself to be useful, however dangerous and irrational her actions were. What mattered was that she felt like she was doing something worthwhile. It gave her a purpose when she was most feeling helpless and frightened.

Miscellaneous: On the movie front, Anjin and I recently watched Live Free or Die Hard starring Bruce Willis. True to everyone’s recommendations, leaving your brain at the door is a must. Once that was done, we both enjoyed the movie quite a bit. Unbelievable? Absolutely! But it sure was fun.

We also saw License to Wed, which we enjoyed (good, not great). It had its funny moments as well as a more serious side. I thought Robin Wiliams did a good job.

We began watching the third season of the western HBO TV show Deadwood over the weekend. I am anxious to see how the final season plays out.
Posted by Literary Feline at 7/09/2007 06:00:00 AM