When I was born, the name for what I was did not exist. ~ opening of Circe 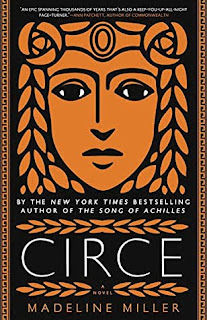 Circe by Madeline Miller
Back Bay Books, 2018
Fantasy; 400 pgs
Source: I bought it for my reading pleasure.
I had high expectations going into Circe. I remember knowing I wanted to read it when I first heard about it, and then, as the praise continued to come in, that only intensified. I decided to read The Song of Achilles first (even though they books are not part of a series) after hearing it was even better. It turned out to be one of my favorite books read the year I read it. With an extra push from those of you who voted for it in my TBR poll in January, I finally picked up Circe—and I loved it. Whew. Expectations met.
I inherited my interest in Greek Mythology from my father, although admit I am not as well-versed in it as others might be. Still, I know enough to be familiar with the names of the gods and goddesses and some of their kin. I did read The Odyssey years ago. It was really Circe herself, a goddess-witch, that first intrigued me when I heard about this book. Circe is the daughter of Helios, god of the sun. She does not seem particularly extraordinary in relation to her siblings, not as powerful as her father and not nearly as alluring as her mother. She is viewed as weak and often dismissed as not being significant. She finds a friend in a mortal, falls in love, and, in wanting more, does the unthinkable, starting a chain reaction that leads to her being banished to a deserted island by her father and Zeus, who feels threatened by the witchcraft she can wield.
I was under Circe’s spell right from the start and the novel was never far from my mind even when I was not reading. Madeline Miller weaves the well-known myth with her own fiction, breathing new life into familiar monsters and heroes like the Minotaur, Daedalus, Medea, and Odysseus and his wife and son. In the novel, the reader gets a real sense of just how uncaring and vengeful the gods could be—how mortals were often their playthings, like pawns on a board, or puppets to manipulate however they wanted. Miller’s Circe was different however. She learned from her mistakes and spent her life atoning for them. She could be cruel, but often it was a reaction to cruelty done to her. She is both strong and vulnerable. She could be heartless but she loved hard. She was a self-made woman, teaching herself witchcraft, and occasionally struggled with loneliness. There was a humanness, if you will, about Circe that made her endearing. I cried with Circe and felt angry alongside her.
I enjoyed the quiet moments in the book just as much as the more intense ones. I would not call Circe a fast paced read, but, as I said before, I was caught in its spell. I wanted to savor every word. There were characters I wish could have been explored more—like Ariadne and Medea—but this was not their story. Themes such as love and loss, family rivalry, vengeance, and motherhood filled the pages of Circe. I can see myself reading this book again and getting something new out of it each time.

I will not be like a bird bred in a cage, I thought, too dull to fly even when the door stands open.
I stepped into those woods and my life began. [pg 81 of Circe]