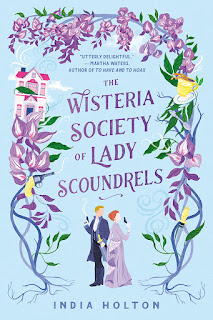 A prim and proper lady thief must save her aunt from a crazed pirate and his dangerously charming henchman in this fantastical historical romance.

Cecilia Bassingwaite is the ideal Victorian lady. She's also a thief. Like the other members of the Wisteria Society crime sorority, she flies around England drinking tea, blackmailing friends, and acquiring treasure by interesting means. Sure, she has a dark and traumatic past and an overbearing aunt, but all things considered, it's a pleasant existence. Until the men show up.

Ned Lightbourne is a sometimes assassin who is smitten with Cecilia from the moment they meet. Unfortunately, that happens to be while he's under direct orders to kill her. His employer, Captain Morvath, who possesses a gothic abbey bristling with cannons and an unbridled hate for the world, intends to rid England of all its presumptuous women, starting with the Wisteria Society. Ned has plans of his own. But both men have made one grave mistake. Never underestimate a woman.

When Morvath imperils the Wisteria Society, Cecilia is forced to team up with her handsome would-be assassin to save the women who raised her--hopefully proving, once and for all, that she's as much of a scoundrel as the rest of them. [Goodreads Summary]

Why I want to read this: This historical romance sounds like just plain fun. 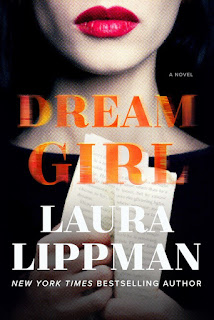 Following up on her acclaimed and wildly successful New York Times bestseller Lady in the Lake, Laura Lippman returns with a dark, complex tale of psychological suspense with echoes of Misery involving a novelist, incapacitated by injury, who is plagued by mysterious phone calls.

After being injured in a freak accident, novelist Gerry Andersen lies in a hospital bed in his glamorous but sterile apartment, isolated from the busy world he can see through his windows, utterly dependent on two women he barely knows: his young assistant and a night nurse whose competency he questions.

But Gerry is also beginning to question his own competency. As he moves in and out of dreamlike memories and seemingly random appearances of a persistent ex-girlfriend at his bedside, he fears he may be losing his grip on reality, much like his mother who recently passed away from dementia.

Most distressing, he believes he’s being plagued by strange telephone calls, in which a woman claiming to be the titular character of his hit novel Dream Girl swears she will be coming to see him soon. The character is completely fictitious, but no one has ever believed Gerry when he makes that claim. Is he the victim of a cruel prank—or is he actually losing his mind. There is no record of the calls according to the log on his phone. Could there be someone he has wronged. Is someone coming to do him harm as he lies helplessly in bed.

Then comes the morning he wakes up next to a dead body—and realizes his nightmare is just beginning... [Goodreads Summary]

Why I want to read this: I have read couple of Laura Lippman books and have been stockpiling her others because they always sound SO good. This one is no exception, and as a result, it's landed a spot on my wish list. It helps that this one has been compared to Misery, one of my favorite Stephen King novels.
Do either of these books interest you? What upcoming releases are you looking forward to reading?
★                          ★                          ★
The Old(er)
I have an embarrassing number of unread books sitting on the shelves in my personal library. Carole of Carole's Random Life in Books has given me the perfect excuse to spotlight and discuss those neglected books in her Books from the Backlog feature. After all, even those older books need a bit of love! Not to mention it is reminding me what great books I have waiting for me under my own roof still to read! 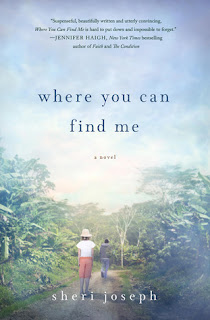 Where You Can Find Me by Sheri Joseph (Thomas Dunne, 2013)

A searing exploration of a family's struggle to heal in the wake of unthinkable tragedy.

A week after his eleventh birthday, Caleb Vincent vanishes with hardly a trace. After a three-year search, he is found living a seemingly normal life under a new name with a man he calls his father.

While outwardly stunned with joy at his safe recovery, Caleb's parents and sister are privately scrambling to gather together the pieces of a shattered family. To escape the relentless media attention surrounding her son’s return, Caleb's mother, Marlene, decides to flee the country and seek refuge in Costa Rica with Caleb and his younger sister, against her estranged husband's wishes. There Marlene forms a makeshift household with her husband’s expat mother and his charming, aimless older brother, all residing in a broken-down hotel perched at the blustery apex of the continental divide. In the clouds of their new home, the mystery of Caleb's time gone unfolds while new dangers threaten to pull him back toward his former life.

Where You Can Find Me, a darkly incandescent novel that progresses with page-turning suspense, is sure to establish award-winning author Sheri Joseph as a household name. [Goodreads Summary]

Why I want to read this: A missing child returned home, a mother trying to put together her broken family, and new and old threats surfacing . . . It is no wonder I added this book to my TBR pile a few years ago. It sounds like an emotional rollercoaster. Now I just need to read it.