Does your mother know you're a pengkid?  [Opening of Black Water Sister] 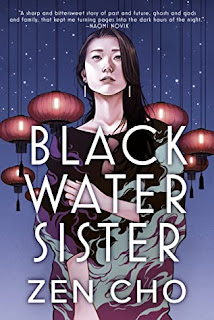 Black Water Sister by Zen Cho
Ace, 2021
Fantasy/LGBTQIA; 384 pgs
Source: I was provided a courtesy copy of the novel for review from the publisher via NetGalley. This opinion is my own.

I have another of Zen Cho's fantasy novels (Sorcerer to the Crown) sitting on my TBR shelf which is much different than her latest I am told. I am even more eager to read that one now that I have read the author's Black Water Sister, which is a Malaysian-set contemporary fantasy. Jessamyn Teoh, aka Jess, and her parents have moved back to Malaysia to start a new life after having lost just about everything due to her father's bout with cancer. Jess starts hearing voices, which at first she is sure must be due to stress, only to soon come to accept that it is the ghost of her estranged grandmother. Jess does not know much about her mother's side of the family and her mother does not like to talk about it. During her life, Jess's grandmother was a spirit medium for a god known as the Black Water Sister. Jess reluctantly agrees to help her grandmother's spirit settle a score with a gang boss who offended the god. She soon finds herself in over her head in a world of gods and ghosts--with her own life at stake.

I admit it took me a moment to settle into Black Water Sister. It starts out a bit slow, but eventually I found myself not wanting to put the novel down. I felt just as lost as Jess did at first, not really understanding what was going on--which is a point in favor of the author for putting me in the shoes of her main character early on. I enjoyed seeing Jess come into her own over the course of the novel. She is a new Harvard graduate, trying to find her place in a new country and life. She feels a strong sense of responsibility to her family, especially to their mental well-being given her father's recent illness. It cannot be easy. I also can appreciate how difficult it must be for Jess who is hiding a very big part of herself from her family, knowing how they feel about same sex relationships.

I found the mythology and world building very interesting. I know so little of Malaysian culture. I loved the juxtaposition of the traditional versus contemporary, including ancient beliefs with more modern Christianity, which is most obvious when Jess's paternal aunt becomes involved. I love Jess's family--how supportive and close they are. I think Jess's mom and her grandmother were among my favorite characters.

Black Water Sister has its dark moments as well as some funny moments. It was hard not to empathize with the Black Water Sister and Jess's grandmother and see how they ended up where they did. Although one particular mystery (or secret, if you prefer) was pretty obvious early on, so much of what happens in the novel was not. Add to that how things played out . . . well, this was a very satisfying read.

The majority of urban legends form around a small grain of truth, however misinterpreted or misunderstood. [Opening of Angel of the Overpass] 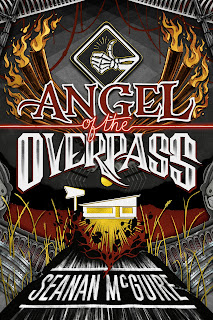 Angel of the Overpass (Ghost Roads #3) by Seanan McGuire
DAW, 2021
Fantasy; 320 pgs
Source: I was provided a courtesy copy of the novel for review from the publisher via NetGalley. This opinion is my own.

I loved the first two books in the Ghost Roads series, Sparrow Hill Road and The Girl in the Green Silk Gown. I am in awe of the world building in this series, the many layers and mythology that runs through it. I also really like Rose Marshall, the protagonist, a sixty or so year old ghost who died on her prom night when she was sixteen years old, hit by a car driven by Bobby Cross. It is no mystery that Bobby Cross wasn't an ordinary man out for a drive that night. He had been purposefully looking for victims he could kill and turn into fuel for his ghost-run car. It was the price of his staying young--a deal struck with a Crossroads ghost years before.

Things are a bit different in the twilight world now, the one where the restless dead often can be found living their lives, since the Crossroads have been destroyed. And this means Bobby Cross, who has been hunting and tormenting Rose and others all these years, has no more protection. Rose is tired of being hunted by Bobby who insists she belongs to him--she is the one who got away. Turning the situation around, she decides to go after him. But it will cost her and it will take the help of friends she has made along the way.

I continue to love the world building and I adore Rose. I was excited to get the opportunity to read and review another book in this series. I enjoyed the overall story and was happy to see the direction the novel took in the end. I liked exploring more of the different layers in this series' world and meeting new characters and visiting with familiar ones. I was a bit disappointed in Angel of the Overpass though. There were moments when I felt there was too much repetition and the story lagged in spots. I hadn't realized this series was tied to another of the author's series, the InCryptid series, which I have yet to read. I guess I had better start reading that one soon! While Angel of the Overpass wasn't my favorite in the series, I did enjoy it and hope there will be more Rose Marshall novels in the future. 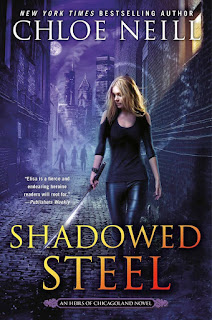 Shadowed Steel (Heirs of Chicagoland #3) by Chloe Neill
Berkley, 2021
Fantasy; 330 pgs
Source: I was provided a courtesy copy of the novel for review from the publisher via NetGalley. This opinion is my own.
Shadowed Steel is the third book in Chloe Neill's Heirs of Chicagoland series. I enjoyed the first two books of this action-packed series, Wild Hunger and Wicked Hour, and so had high hopes going into this one. It did not disappoint.
The Assembly of American Masters (AAM), the ruling body of vampires, accuses our heroine, Elisa Sullivan, of breaking one of their steadfast rules. She disagrees. When one of the AAM vampires is murdered, the obvious suspect is Elisa, and she won't stand down until she finds out who is behind not only the murder but who is also targeting her. Fortunately, she is not on her own. Her werewolf boyfriend, sworn-off-magic sorceress best friend and other loyal friends have her back.
I have not read the parent series from which Heirs of Chicagoland is a spin off but have not felt like I have missed out on much. Eventually I would like to go back and read that series, which features Elisa's parents. Elisa is a special vampire, the only one known of her kind, born to actual vampire parents with the help (or curse) of magic. As a result, she is a bit of an unknown entity which makes some vampires feel threatened. Elisa is always having to prove herself one way or another, and maintaining her autonomy is becoming increasingly difficult. Then there is the monster inside of her that she is still trying to figure out.
I enjoy spending time with Elisa, and her boyfriend Connor, who has to be given credit for stepping back and trusting Elisa to take care of her own business even with his protective werewolf instincts kicking in. Shadowed Steel was fast-paced and action-packed as expected and an overall entertaining read. The mystery of who was behind the murder was fairly obvious early on, but the fun was in seeing how best Elisa and her friends could prove it in such a way that would land Elisa on top in the end. After all, just because someone was murdered didn't mean she was off the hook for the accusations made against her. I continue to really enjoy this series and look forward to reading more in the future.
Challenge Met: Spring COYER Challenge
© 2021, Musings of a Bookish Kitty. All Rights Reserved. If you're reading this on a site other than Musings of a Bookish Kitty or Wendy's feed, be aware that this post has been stolen and is used without permission.
Posted by Literary Feline at 5/17/2021 04:00:00 PM