Bookish Mewsings: Anything That Happens by Cheryl Wilder 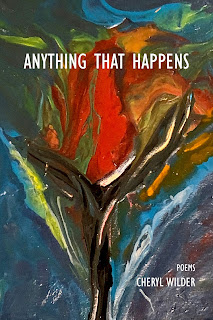 At the age of twenty, Cheryl Wilder got behind the wheel when she was too drunk to drive. She emerged from the car physically whole. Her passenger, a close friend, woke up from a coma four months later with a life-changing brain injury. Anything That Happens follows her journey from a young adult consumed by shame and self-hatred to a woman she can live with... and even respect. Along the way, Wilder marries, has a son, divorces, and cares for her dying mother. Anything That Happens examines what it takes to reconcile a past marked by a grave mistake, a present as caregiver to many, and a future that stretches into one long second chance. [Goodreads Summary]

I have so many thoughts and feelings swirling inside my brain about Cheryl Wilder's Anything That Happens. The first poem which is also the title of this collection, begins

Until I was twenty, I believed anything
wouldn't happen to me

I think this is something many of us can relate to, although the age may vary and it isn't necessarily a feeling we have only once in life. For the author, in this instance, it was a car accident that would leave her friend in a coma for months while she herself was wracked with guilt and shame. We always think of this type of thing happening to someone else. Not us. Until it does.
Anything That Happens tells the story of what happened that night, interspersed with other poems of after, and about what the author was feeling and thinking during that time. The two young women were enjoying their evening, had had a little too much to drink, and one of them got behind the wheel.

I cut letters from magazines,
tape century gothic next to brush script
hope the secrets won't know
it's me, digging up the family ash [excerpt from "Secrets"]

This collection is about more than just that accident. Wilder also writes about the stigma and judgement--how others see her after the fact. She opens up about giving birth to her son, her absent father, her dying mother, and relationship with her ex-husband. Throughout she explores feelings of loss and grief, anger and self-hatred, and of finally forgiving oneself.

but I reclaim this house
where doors divide grief in the bedroom
from guilt simmering in the kitchen --
even trauma has to eat. [excerpt from "Emotional House"]

I found Wilder's poetry to be extremely visceral. I felt her words. I generally like to read poetry out loud, but I found myself preferring to read this one inside my own head. It felt too personal, too raw.

[...] What is left
but a future where I am not worth saving. [excerpt from For "What It's Worth"]

I do not often think about the overall layout of a poetry collection unless it's a novel-in-verse. Anything That Happens isn't such a novel, but it has a distinct narrative flow which works so perfectly, each poem flowing into the next. The final poem is such a perfect note to end on.

What does it mean to shelter
a loved one? to allow for refuge?
A secret room
the proper color
for wiping tears on sheets. [excerpt from To Have a House]

Cheryl Wilder's Anything That Happens is a book I will not soon forget. I imagine I will carry it with me for a long time to come.

I hope you will check out what others have to say about Anything That Happens by Cheryl Wilder on the Poetic Book Tours route:

Available at Press 53 and Amazon.

April 1: Diary of an Eccentric (Review)

May 3: Musings of a Bookish Kitty (Review)

Follow the blog tour with the hashtag #AnythingThatHappens #CherylWilder @Press53

Many thanks to the Poetic Book Tours and Cheryl Wilder for the opportunity to be a part of this book tour! Thank you also for providing a copy of the book for my honest review.
© 2021, Musings of a Bookish Kitty. All Rights Reserved. If you're reading this on a site other than Musings of a Bookish Kitty or Wendy's feed, be aware that this post has been stolen and is used without permission.
Posted by Literary Feline at 5/02/2021 11:00:00 PM