Waiting to Read Wednesday: Death in Bloom / Talk Bookish To Me / History Is All You Left Me 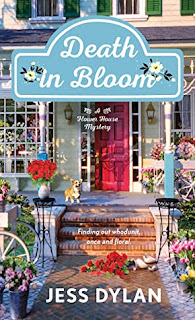 At the Flower House, every rose has its thorn . . .

Sierra Ravenswood is the new part-time employee of the Flower House, a flower shop in Aerieville, Tennessee. It's true she didn't expect to be back in her hometown at twenty-eight-years-old, but after her dream of making it as a singer in Nashville crashed and burned, she's just grateful to have found a soft place to land.

Because, after all, Sierra firmly believes in being optimistic and positive about life, so she's sure she won't have to work at the Flower House forever. But things take a decidedly negative turn when a customer drops dead in the middle of her new bouquet-arranging workshop at the store. When it's discovered he was poisoned by a snack at the event, everyone at the workshop, including Sierra, is on the suspect list. To make matters worse, her boss has gone AWOL and left the store to her for the cost of one dollar, leaving Sierra in charge of both his store and his high-energy Corgi puppy, Gus.

The town is on edge, and Sierra knows that murder is something that an upbeat attitude and a bouquet of sweet-smelling roses can't fix. She's determined to figure out whodunit, before anyone else in town meets an untimely reason for needing funeral flowers. [Goodreads Summary]

Why I want to read this: A new cozy mystery series to try! I love the flower shop setting--and a corgi! 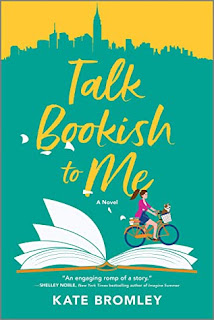 Talk Bookish to Me by Kate Bromley
Release Date: May 25, 2021 by Graydon House

Inspiration can come from the most unlikely - and inconvenient - sources.

Kara Sullivan’s life is full of love - albeit fictional. As a best-selling romance novelist and influential Bookstagrammer, she’s fine with getting her happily-ever-after fix between the covers of a book.

But right now? Not only is Kara’s best friend getting married next week - which means big wedding stress - but the deadline for her next novel is looming, and she hasn’t written a single word. The last thing she needs is for her infuriating first love, Ryan Thompson, to suddenly appear in the wedding party. But Ryan’s unexpected arrival sparks a creative awakening in Kara that inspires the steamy historical romance she desperately needs to deliver.

With her wedding duties intensifying, her deadline getting closer by the second and her bills not paying themselves, Kara knows there’s only one way for her to finish her book and to give her characters the ever-after they deserve. But can she embrace the unlikely, ruggedly handsome muse—who pushes every one of her buttons—to save the wedding, her career and, just maybe, write her own happy ending? [Goodreads Summary]

Why I want to read this: I think the title and cover say it all, but the description doesn't hurt either. This sounds like a fun romance with a bookish theme.
Does either of these books interest you? What upcoming releases are you looking forward to reading? 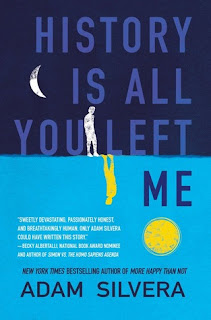 History Is All You Left Me by Adam Silvera (Soho Teen, 2017)

OCD-afflicted Griffin has just lost his first love, Theo, in a drowning accident. In an attempt to hold onto every piece of the past, he forges a friendship with Theo's last boyfriend, Jackson. When Jackson begins to exhibit signs of guilt, Griffin suspects he's hiding something, and will stop at nothing to get to the truth about Theo's death. But as the grieving pair grows closer, readers will question Griffin's own version of the truth—both in terms of what he's willing to hide and what true love means. [Goodreads Summary]

Why I want to read this: History Is All You Left Me came in one of my LitBox subscriptions I received years ago, featuring authors of color. I have heard great things about Adam Silvera's work, and so was excited to receive this novel. I just need to read it now . . .
Have you read History Is All You Left Me? Does this book sound like something you would like to read?
© 2021, Musings of a Bookish Kitty. All Rights Reserved. If you're reading this on a site other than Musings of a Bookish Kitty or Wendy's feed, be aware that this post has been stolen and is used without permission.
Posted by Literary Feline at 5/11/2021 09:00:00 PM