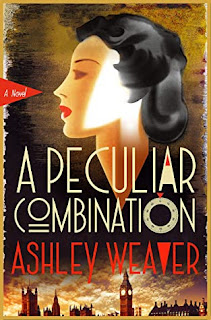 The first in the Electra McDonnell series from Edgar-nominated author Ashley Weaver, set in England during World War II, A Peculiar Combination is a delightful mystery filled with spies, murder, romance, and the author's signature wit.

Electra McDonnell has always known that the way she and her family earn their living is slightly outside of the law. Breaking into the homes of the rich and picking the locks on their safes may not be condoned by British law enforcement, but World War II is in full swing, Ellie's cousins Colm and Toby are off fighting against Hitler, and Uncle Mick's more honorable business as a locksmith can't pay the bills any more.

So when Uncle Mick receives a tip about a safe full of jewels in the empty house of a wealthy family, he and Ellie can't resist. All goes as planned--until the pair are caught redhanded. Ellie expects them to be taken straight to prison, but instead they are delivered to a large townhouse, where government official Major Ramsey is waiting with an offer: either Ellie agrees to help him break into a safe and retrieve blueprints that will be critical to the British war effort, before they can be delivered to a German spy, or he turns her over to the police.

Ellie doesn't care for the Major's imperious manner, but she has no choice, and besides, she's eager to do her bit for king and country. She may be a thief, but she's no coward. When she and the Major break into the house in question, they find instead the purported German spy dead on the floor, the safe already open and empty. Soon, Ellie and Major Ramsey are forced to put aside their differences to unmask the double-agent, as they try to stop allied plans falling into German hands. [Goodreads Summary]

Why I want to read this: A thief recruited by the government to help in the war effort? And a woman thief at that? I'm doubly interested in giving this new series a try. I love a good historical mystery and this one sounds like it will a winner. 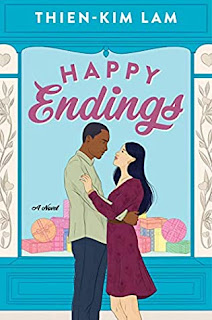 With her debut novel, Thien-Kim Lam serves up a sexy second-chance romance about exes with unfinished business. When working together reignites their passion, will these former flames sizzle or get burned all over again?

Trixie Nguyen is determined to make her sex toy business a success, proving to her traditional Vietnamese parents that she can succeed in a nontraditional career. She's made a fresh start in Washington DC, and her first pop-up event is going well—until she runs into the ex who dumped her. With a Post-it note.

Thanks to their steamy truce, both businesses start to sizzle and their red-hot desire soon reignites deeper feelings. But when Trixie receives an incredible career opportunity, will pride ruin their second chance at happiness?  [Goodreads Summary]

Why I want to read this: I hate the idea of Andre losing his family restaurant to gentrifying developers. I enjoy a good second-chance romance and hope this one will be a good one.
Does either of these books interest you? What upcoming releases are you looking forward to reading? 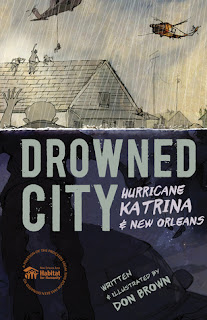 On August 29, 2005, Hurricane Katrina's monstrous winds and surging water overwhelmed the protective levees around low-lying New Orleans, Louisiana. Eighty percent of the city flooded, in some places under twenty feet of water. Property damages across the Gulf Coast topped $100 billion. One thousand eight hundred and thirty-three people lost their lives. The riveting tale of this historic storm and the drowning of an American city is one of selflessness, heroism, and courage—and also of incompetence, racism, and criminality.

Don Brown’s kinetic art and as-it-happens narrative capture both the tragedy and triumph of one of the worst natural disasters in American history. A portion of the proceeds from this book has been donated to Habitat for Humanity New Orleans. [Goodreads Summary]

Why I want to read this: Hurricane Katrina was devastating to so many, not to mention brought to light systematic and societal problems that had long been ignored. This particular graphic novel came highly recommended about a time in America's history that I would like to know more about and so I added it to my TBR pile. Another neglected book I still really want to read.