Weekly Mews: Celebrating a Birthday ... and a Year of Isolation

I am linking up to the Sunday Post hosted by Kim of Caffeinated Book Reviewer and The Sunday Salon (TSS) hosted by Deb Nance of Readerbuzz  where participants recap our week, talk about what we are reading, share any new books that have come our way, and whatever else we want to talk about. I am also linking It's Monday! What Are you Reading? hosted by Kathryn of Book Date where readers talk about what they have been, are and will be reading.
What I Am Reading: I finished reading M. Ravenel's The Arrangement, the first book in her P.I. Tootsie Carter series set in the 1970's this past week. It was a quick and fun read.
Mouse and I are nearing the end of Tales of a Not-So-Glam TV Star (Dork Diaries #7) by Rachel Renée Russell. There is one scene that had us laughing so hard (tears were running down my face--which only made Mouse laugh harder). It was funny and gross and I still cannot believe the character did that . . .
I am also reading The Memory Collectors by Kim Neville about two women with a similar gift (or curse) of feeling the emotions of objects people have left behind. They both view their abilities in very different ways. It's a more serious read in comparison to some of my other books read lately. I am enjoying it so far.
Next up will be this month's TBR List Poll winner, which I am very much looking forward to reading. Thank you again to all who voted!

What I Am Watching: I FINALLY started watching the 15th season of Supernatural. I hadn't realized how much I missed Sam, Dean and Castiel. It is good to be spending time with them again.
This past weekend we watched the new Disney movie, Raya and the Last Dragon on Disney+. We all enjoyed it, although I think Mouse wishes it had been a musical. 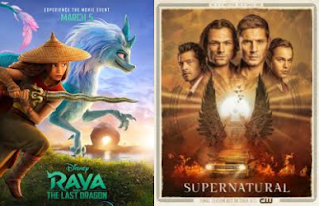 Off the Blog: One day this past week I took the day off work so I could do some running around for my daughter's birthday. My husband and I decided to keep it lowkey this year because of the pandemic and my lack of creative party planning abilities. I got her doughnuts in the morning before school, presented her with a bouquet of birthday balloons, served her one of her favorite lunches, and we had pizza from her favorite Italian restaurant for dinner. There were presents from my husband and I as well as out of town family. Throughout the morning her teacher made sure to wish her a happy birthday several times, which I thought was nice of him. She had wanted to make her own birthday cake this year, and it turned out very yummy, Chocolate cake topped with chocolate frosting with pink frosting accents. One of her friends came over to drop off a present and the girls (masked and distanced, of course) played and talked in our yard while us moms talked for a while. She seemed to have a nice day over all. My mom will be coming the week after next to celebrate--so  the birthday celebrations aren't over yet. We haven't seen each other in over a year now and so are very excited about her visit.
Other than that, the week was fairly normal. It was my turn to work in the office and I had it pretty much to myself. I do not know if I will ever get used to the office being so empty. Of course, now there is talk of having staff in office more frequently but those plans are still up in the air for the time being.
Girl Scout cookies sales are over for my daughter's troop. The Council extended the season another week because the area counties opened sales for booth sales last week and next. Our troop decided not to take part, a decision I am very happy with. The girls finished up their cooking badge and are now working on a scribe badge. For the first part, they have to write a poem and a short story.
Mouse's Zoom dance classes and rehearsals are going as well as can be, as is school. Her teacher has been teaching in his classroom the entire school year and so was on campus the day the hybrid students returned to the physical classroom. His class is strictly virtual and so he isn't teaching any children in-person this school year, but he wanted to wave and greet those who were returning--so he unplugged his computer and brought his class along so they could wave and say hello to the returning students too. The students, my daughter included, got to see the long line of kids waiting their turn for temperature checks before being allowed on campus. I did not see any of this, just heard it from the other room. I thought it was a nice gesture but also felt sad for those kids in my daughter's class who are disappointed they are not able to return in-person for the rest of the year.
It sounds like the county I live in will be moving up to the red tier the middle of next week, which will allow indoor dining among other restrictions being lifted --with limitations. Not that most restaurants in the area are not already open for both indoor and outdoor dining. The vaccination effort continues and seems to be going better than it was initially.
This week has been more of an emotional one than I would have expected, thinking back to where we were a year ago. The panic and fear, the not knowing and helplessness that followed. It has been a year since my daughter was last in a classroom or in daycare. Almost a year since my husband began working strictly from home and me part of the time. A year since our lives were turned completely upside down and we struggled to find a new normal, unsure how long it would last. Three weeks we were told back then. Three weeks that turned into more than a year. Its seems like a lifetime ago. So many lives lost.
What I Am Grateful For: Laughing uncontrollably with my daughter over a book. Homemade birthday cake. Surviving this past year. Time with my family.

This Past Week In Reading Mews:
Tell me what you have been up to! What are you reading, listening to and watching? How was your week? Do you have anything planned for this month? 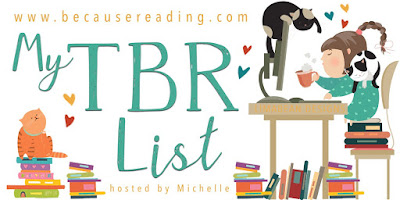 My TBR List is hosted by the awesome Michelle at Because Reading. It’s a fun way to choose a book from your TBR pile to read. The 1st Saturday of every month, I will list 3 books I am considering reading and take a poll as to which you think I should read. I will read the winner that month. My review will follow (unfortunately, not likely in the same month, but eventually--that's all I can promise). 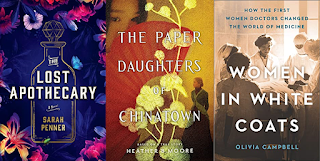 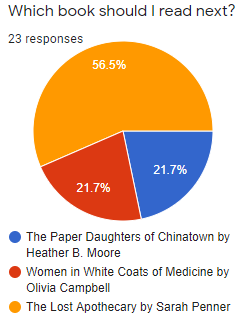 Thank you to all who voted in this month's poll. The choices were very different from one another but all shared a historical theme with a focus on women. The two books that did not win tied with five votes each. They were The Paper Daughters of Chinatown by Heather B. Moore and Women in White Coats by Olivia Campbell. Winning by a whopping 13 votes was The Lost Apothecary by Sarah Penner. I am looking forward to starting on that one soon! 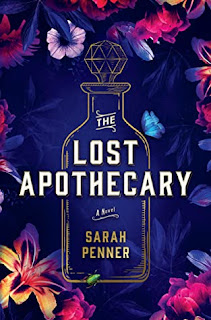