Waiting to Read Wednesday: Anywhere for You / The Last Bookshop in London / Phantoms & Felonies / If Today Be Sweet 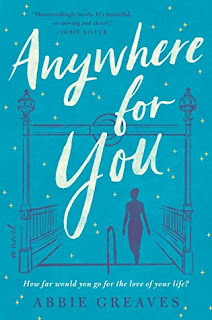 Anywhere for You by Abbie Greaves
Release Date: April 6, 2021 by William Morrow

A poignant and thrilling love story about one woman’s decade-long search to reconnect with the love of her life who disappeared without a trace.

The straphangers of Ealing Broadway station are familiar with Mary O’Connor, the woman who appears every day to watch the droves of busy commuters. But Mary never asks anything from anyone. She only holds out a sign bearing a heartrending message: Come Home Jim.

While others pass her by without a thought, Alice, a junior reporter at the Ealing Bugle, asks Mary to tell her story. Many years ago, Mary met the charming and romantic Jim Whitnell. She was certain she’d found her other half, until one day he vanished without any explanation. But Mary believes that Jim isn’t a cad, that he truly loved her and will return—especially because she’s recently received grainy phone calls from him saying he misses her.

Touched but also suspicious, Alice quietly begins her own investigation into Jim’s disappearance, unraveling a decade-long story filled with desire, heartbreak, and hope. With Greaves’s signature warmth and charm, Anywhere for You is a romantic and immensely moving novel about the enduring power of love and finding happiness in unexpected places. [Goodreads Summary]

Why I want to read this: I cannot help but wonder what Mary's story is and why she is unable to let go of Jim after all these years. Is he on the other end of the phone? Will she ever see him again? 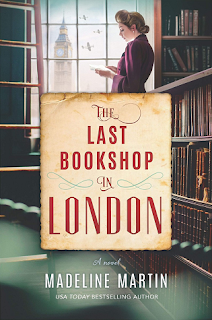 Inspired by the true World War II history of the few bookshops to survive the Blitz, The Last Bookshop in London is a timeless story of wartime loss, love and the enduring power of literature.

August 1939: London is dismal under the weight of impending war with Germany as Hitler’s forces continue to sweep across Europe. Into this uncertain maelstrom steps Grace Bennett, young and ready for a fresh start in the bustling city streets she’s always dreamed of—and miles away from her troubled past in the countryside.

With aspirations of working at a department store, Grace never imagined she’d wind up employed at Primrose Hill, an offbeat bookshop nestled in the heart of the city—after all, she’s never been much of a reader. Overwhelmed with organizing the cluttered store, she doesn’t have time to read the books she sells. But when one is gifted to her, what starts as an obligation becomes a passion that draws her into the incredible world of literature.

As the Blitz rains down bombs on the city night after night, a devastating attack leaves the libraries and shops of London’s literary center in ruins. Miraculously, Grace’s bookshop survives the firestorm. Through blackouts and air raids, Grace continues running the shop, discovering a newfound comfort in the power of words and storytelling that unites her community in ways she never imagined—a force that triumphs over even the darkest nights of war-torn London. [Goodreads Summary]

Why I want to read this: Books bring comfort even in the darkest of times. I enjoy historical fiction and you can probably guess why this one in particular appealed to me. I look forward to reading this one. 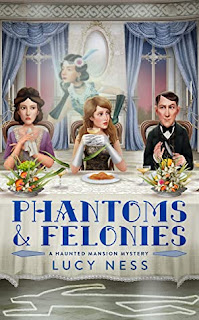 Avery Morgan has been hired to breathe new life into the Portage Path Women's Club, but first she'll have to deal with a dead body and a meddling ghost.

When a local theater troupe puts on a new play at the club, manager Avery Morgan is excited. This is just the sort of event that's destined to bring in potential new members. Okay, millionaire banker Bob Hanover has more bucks than talent and has used his position to grab the lead role, but that seems like a small price to pay...until Bob is found dead backstage.

Bob rubbed many people the wrong way, but would anyone want him dead? The short answer to that is: Who wouldn't want him dead? His long-suffering wife had to put up with years of womanizing. The show's playwright has been tricked out of his one great idea by Bob, who claimed it as his own work. And Bob bankrupted one of the town's small businessmen. The choices are many and the time to find the killer is running short.

Avery is working overtime to keep the club open and find the killer. Fortunately, she has help with the latter task. Clemmie Bow was once a singer in the speakeasy in the club's basement. Now she's a ghost who's also a top-notch detective. Together Clemmie and Avery will find the killer—even if it kills one of them. [Goodreads Summary] If Today Be Sweet by Thrity Umrigar (Harper Perennial, 2007)

Tehmina Sethna's beloved husband has died this past year and she is visiting her son, Sorab, in his suburban Ohio home. Now Tehmina is being asked to choose between her old, familiar life in India and a new one in Ohio with her son, his American wife, and their child. She must decide whether to leave the comforting landscape of her native India for the strange rituals of life in a new country.

This is a journey Tehmina, a middle-aged Parsi woman, must travel alone.

The Parsis were let into India almost a millennium ago because of their promise to "sweeten" and enrich the lives of the people in their adopted country. This is an ancient promise that Tehmina takes seriously. And so, while faced with the larger choice of whether to stay in America or not, Tehmina is also confronted with another, more urgent choice: whether to live in America as a stranger or as a citizen. Citizenship implies connection, participation, and involvement. Soon destiny beckons in the form of two young, troubled children next door. It is the plight of these two boys that forces Tehmina to choose. She will either straddle two worlds forever and live in a no-man's land or jump into the fullness of her new life in America.

If Today Be Sweet is a novel that celebrates family and community. It is an honest but affectionate look at contemporary America—the sterility of its suburban life, the tinsel of its celebrity culture, but also the generosity of its people and their thirst for connection and communication. Eloquently written, evocative, and unforgettable, If Today Be Sweet is a poignant look at issues of immigration, identity, family life, and hope. It is a novel that shows how cultures can collide and become better for it. [Goodreads Summary]

Why I want to read this: I have loved everything I have read by Thrity Umrigar. She is such an amazing author. I added this to my TBR shelf in 2008 and still very much want to read it.

Have you read If Today Be Sweet? Does this book sound like something you would like to read?