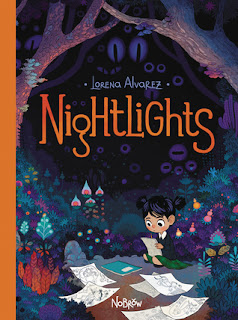 Nightlights (#1) by Lorena Alvarez Gomez
Nobrow Press, 2017
Fantasy/Middle Grade/Graphic Novel; 60 pgs
This one took me some thinking about and a couple of readings, before I fully appreciated it. My problem is I have a tendency to race through graphic novels, and this is one in which the story is more fully told in the artwork--which is gorgeous and vibrant, at times whimsical or eerie, and so imaginative.
Nightlights in the story of a girl names Sandy who loves to draw. She would much rather draw than do just about anything else. Her drawings come to life when she puts pen to paper, and she creates worlds only she seems to appreciate. One day, a mysterious girl appears who takes an immediate interest in Sandy's art. She is the first person to tell Sandy how much she likes it. Sandy is so excited that someone has finally recognized her art and sees how important it is to her. As the story continues, Morfie, the mysterious girl, proves that she isn't as innocent a friend as she first appeared. Morfie wants Sandy to only draw for her and grows more aggressive and demanding as time goes by. Over the course of the novel, the reader sees Sandy go through a range of moods in response: anger, sadness, withdrawal, and even fear. Her insecurities play out on the page through the artwork. Just as the situation seems hopeless, Sandy takes back control of her art and finds her way out. 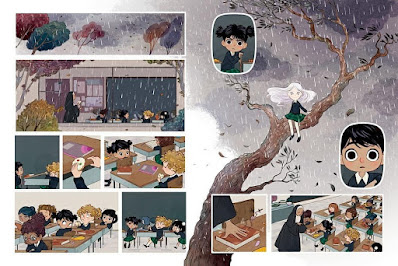 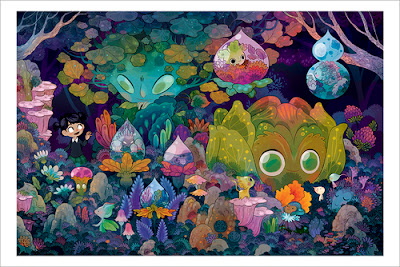 The artwork makes this graphic novel. I felt the ending was a bit abrupt and not quite complete. I am not sure if that will be addressed in the next volume, or if this is it. I do know that my daughter loved Nightlights. Just as Sandy does, Mouse likes to draw. When I asked her why she liked this book so much, she said it was because she thought the art was pretty and because she could relate to Sandy. She said she and her art are misunderstood and not always appreciated by others. She liked how Sandy eventually stood up to the evil girl through her art. My daughter has often said she herself turns to art when she is feeling sad or upset to help her feel better. Any book my daughter loves is a winner for me. 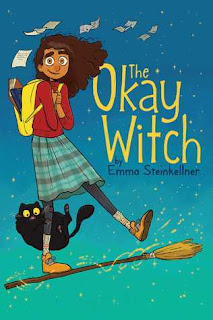 The Okay Witch by Emma Steinkellner
Aladdin, 2019
Fantasy/Middle Grade/Graphic Novel; 272 pgs
My daughter is into all things witches and when I was looking for graphic novels to get her for Christmas, I came across this one. It did not take me long to dive in after she unwrapped it Christmas morning.
I really liked this middle grade graphic novel about 13-year-old Moth Hush who discovers she is a real live witch when something unexpected happens to the two boys bullying her on Halloween. Moth has long loved all things witch related and couldn't be more excited about her new found abilities. Only her mother is not too thrilled. Moth's mother has wanted nothing more than for her and her daughter to lead normal human lives. She put that magic stuff behind her long ago when she broke ties to her own mother. Moth quickly realizes she needs help controlling her magic and when her mother will not help, she turns to her mother's diary. It isn't any ordinary diary though. It opens an entire new world to Moth.
The town, Founder's Bluff, Massachusetts does not have the best history when it comes to the treatment of witches. In fact, it's a part of the town's heritage and pride that the founding father of the town forced the witches out. The celebrate that moment, in fact. This added layer of world building only enhances the story and what the characters have and are going through. Of course, it also plays a major part in events that play out throughout the novel.
Moth is such a great character. Even having been born and raised in Founder's Bluff, she has always felt like an outsider. When she comes into her magic, she starts to really question the way things are done, including pointing out the discrepancies in the way history is portrayed.
Another aspect of the novel I liked was the approach the author took with the conflict between Moth and her mother and Moth's mother and her own mother. Three generations of strong witches, each with very solid ideas of who they are or want to be. Despite Moth and her mother seeming to want different things, one wanting to use her magic and the other to forget she has it, their stories are very similar. Both rebel against their mothers who want something else for them.
Being as this is a graphic novel, I probably should say something about the art. The story is clearly strong on it's own, but I think the art adds to it in ways that just words would not. Describing those silent moments, and capturing emotion, not to mention giving the reader a more real feel of Hecate--which you will get to know if you read the novel. 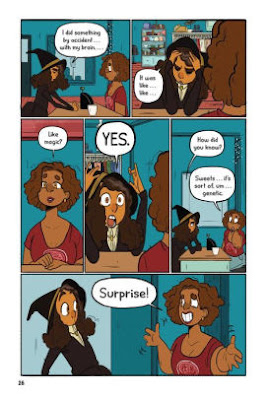 I do not believe there was anything I did not like about The Okay Witch. It is one of those books I think  person could get more out of with each re-reading. It is funny and full of heart, not to mention just a great adventure story. Plus there's a talking cat. I know my daughter will love it too when she reads it. Regardless, the next book in the series which comes out this summer is on my wish list. 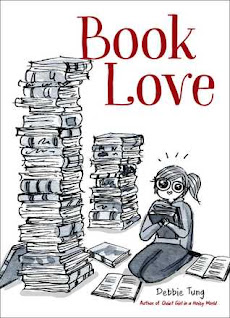 Book Love by Debbie Tung
Andrews McMeel Publishing, 2019
Nonfiction/Humor/Graphic Novel; 137 pgs
While the two above books were Christmas presents for my daughter, Book Love is all for me. I bought myself a copy a couple of years ago after hearing such great things about it. It's not so much a story type graphic novel, but more a compilation of the artist's illustrations denoting her love for books and reading. I just love this collection and could relate to so many of the comics. From reading being magic to not wanting to loan out books (without strict rules), to trying to peek at what strangers are reading when I pass by others who are reading in public, and on and on. It's a wonderful little collection every book lover can relate to. If you are looking for something quick, light and fun, definitely give this one a try. 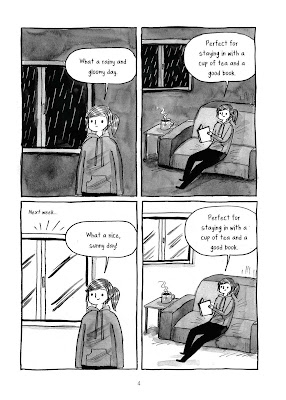 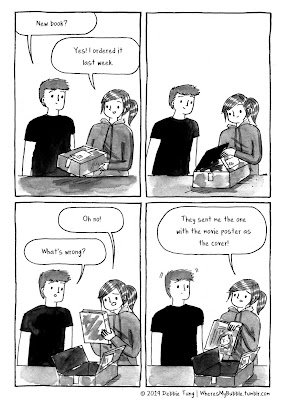