Bookish Thoughts: The Secret Language of Cats by Susanne Schötz

Humans and cats: two different species with a common language that bridges the divide between them--is such a thing even possible? ~ Opening of The Secret Language of Cats 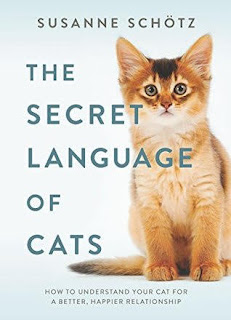 The Secret Language of Cats: How to Understand Your Cat For A Better, Happier Relationship
by Susanne Schötz, translated by Peter Kuras
Hanover Press, 2018
Nonfiction; 272 pgs

My love for cats is obvious by just one look at my blog. And so when I was asked if I was interested in reviewing The Secret Language of Cats as part of the TLC tour, it did not take long for me to say yes. I grew up with dogs and was well into adulthood when I took in my first cat. I have had cats in my life for just over sixteen years now. I think I am fairly good at guessing some of what my cats want by the sounds they make and their body language and behavior. I am by no means an expert though.

In Susanne Schötz's novel I found both validation and also new insight into my cats and the various sounds they make. Dr. Schötz has the advantage of being a linguist, with an ear for variations in sound quality, syllables, melodies and prosody. She is a professor at Lund University in Sweden, and has extended her interest in human phonetics to that of cats. Her interest in cat sounds and language grew from her love for cats as well as her love for research. As I read her book and even after, I find myself listening more carefully to the sounds my cats are making, trying to discern some of the detail in the sounds they make. It isn't easy for someone with an untrained ear, but hopefully with time it will get easier.

Cats and humans do not share the same language, and while research has shown cats do have common identifiable sounds, there is variation between cats. While some sounds are universal, others may not be. Cultural, geographic and breed-based differences exist. Just how much cats pick up from their humans and to what degree they adjust their language to be understood by us is still under investigation, but the belief is that this does occur.

I liked that the author went into detail about cat behavior along with the different sounds they may be making. The two go hand in hand and can make the difference in what a cat may want or be trying to convey. The author also gave concrete examples of a variety of situations, many of which are based on her experiences with her own cats.

Dr. Schötz is as methodical in her research as she can be. She understands that studying cat language is a challenge in and of itself. I appreciated her techniques and preference for conducting any research in a cat's natural setting, not to mention putting as little stress on them as possible. No labs or invasive medical procedures were used. Simply the home environment and recording devices--and lots of time. You cannot expect a cat to purr contently in while in a stressful laboratory, after all.

Dr. Schötz hopes that her research will not only give us a better understanding of cat language, but also how that understanding can improve our relationships with cats both on the home front and in such areas as animal therapy, veterinary medicine and animal sanctuaries.

Towards the end of her book, Dr. Schötz talks a little about her current project, Meowsic, which deals most specifically with using cats in animal therapy. While dogs tend to be the go to animals because of their high train-ability and excellent noses, cats have proven to be good companions too.

Although at times a bit dry due to the detailed descriptions and breakdown of the various vocalizations a cat can make, I enjoyed Dr. Schötz's The Secret Language of Cats and found it to to be a fascinating read. Perhaps some of what I have learned in this book will improve my own relationship with my cats.

I hope you will check out what others had to say about The Secret Language of Cats on the TLC Book Tours route!