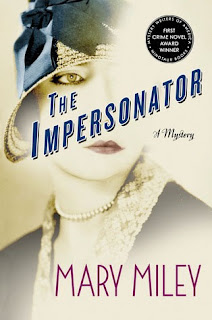 
In 1917, Jessie Carr, fourteen years old and sole heiress to her family's vast fortune, disappeared without a trace. Now, years later, her uncle Oliver Beckett thinks he's found her: a young actress in a vaudeville playhouse is a dead ringer for his missing niece. But when Oliver confronts the girl, he learns he's wrong. Orphaned young, Leah's been acting since she was a toddler.

Oliver, never one to miss an opportunity, makes a proposition—with his coaching, Leah can impersonate Jessie, claim the fortune, and split it with him. The role of a lifetime, he says. A one-way ticket to Sing Sing, she hears. But when she's let go from her job, Oliver's offer looks a lot more appealing. Leah agrees to the con, but secretly promises herself to try and find out what happened to the real Jessie. There's only one problem: Leah's act won't fool the one person who knows the truth about Jessie's disappearance.

Why I want to read this: I love a good mystery involving an impersonator, and this likely landed on my shelf for that very reason. Vaudeville, bootleggers and gangsters? Sounds like a lot of fun! 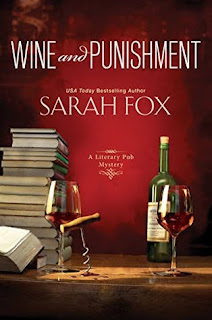 
In the first in an engaging new mystery series from USA Today bestselling author Sarah Fox, the owner of a charming literary pub finds her fresh start on the rocks thanks to a case of murder.

Booklover Sadie Coleman knows that in life, as in fiction, the right setting can make a world of difference. The small town of Shady Creek, Vermont, seems like the perfect place to start over after losing her Boston job to a merger and her relationship to her ex’s gambling addiction. She’s bought and redecorated the old grist mill pub, transforming the Inkwell into a cozy spot where tourists and regulars alike can enjoy a pint or a literary-themed cocktail, or join one of several book clubs.

Little by little, Sadie is adjusting to the rhythms of her new home. Fall in Shady Creek is bookmarked by the much-anticipated Autumn Festival, complete with a pumpkin catapult competition and pie bake-off. Unfortunately, the season also brings an unwelcome visitor—Sadie’s ex, Eric, who’s angling for a second chance . . .

Before Sadie can tell Eric to leave, he’s found dead near the Inkwell. When the local antique shop catches fire on the same night, it’s clear the town is harboring at least one unsavory character. Now, with her Aunt Gilda, her friend Shontelle, and the pub’s patrons all in the mix, Sadie must uncover the truth . . . before a killer declares last call. [Goodreads Summary]

Why I want to read this: As you know, I cannot resist a cozy featuring a fellow booklover--and a literary pub to boot? I cannot wait to give this series a try! 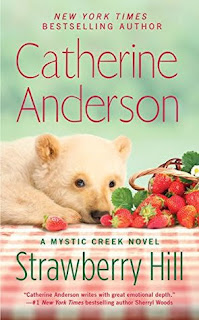 
Newcomer to the sheriff's department Erin De Laney knows next to nothing about wilderness patrols, but she's also never been one to back down from a challenge. So when a rude and stubborn cowboy takes her by surprise on her first day patrolling the mountain trails as a part-time ranger, she lets him have it.

Wyatt Fitzgerald doesn't consider his deafness a disability and he doesn't want special consideration from anyone--least of all, a spoiled city girl like Erin. He prides himself on his ability to read lips and when she confronts him, Wyatt sees no reason to volunteer to her that he's deaf.

But there's no escaping each other in the small Oregon town, especially once Erin seeks him out to make amends. Wyatt gave up on dating long ago, but the written correspondence he and Erin begin to share speak to him like nothing else ever has. Out of their tentative truce blossoms a chance for a once-in-a-lifetime love if he's willing to give her his heart and make her his. [Goodreads Summary]

Why I want to read this: Sometimes I am in the mood for a little romance, and I have enjoyed one of Catherine Anderson's novels before. I like that this one features a deaf hero--something you do not see often enough in romance fiction today.