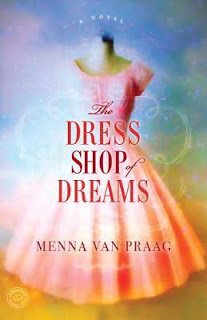 The Dress Shop of Dreams by Menna van Praag
(Ballantine, 2014)

For fans of Alice Hoffman, Sarah Addison Allen, and Adriana Trigiani, The Dress Shop of Dreams is a captivating novel of enduring hopes, second chances, and the life-changing magic of true love.

Since her parents’ mysterious deaths many years ago, scientist Cora Sparks has spent her days in the safety of her university lab or at her grandmother Etta’s dress shop. Tucked away on a winding Cambridge street, Etta’s charming tiny store appears quite ordinary to passersby, but the colorfully vibrant racks of beaded silks, delicate laces, and jewel-toned velvets hold bewitching secrets: With just a few stitches from Etta’s needle, these gorgeous gowns have the power to free a woman’s deepest desires.

Etta’s dearest wish is to work her magic on her granddaughter. Cora’s studious, unromantic eye has overlooked Walt, the shy bookseller who has been in love with her forever. Determined not to allow Cora to miss her chance at happiness, Etta sews a tiny stitch into Walt’s collar, hoping to give him the courage to confess his feelings to Cora. But magic spells—like true love—can go awry. After Walt is spurred into action, Etta realizes she’s set in motion a series of astonishing events that will transform Cora’s life in extraordinary and unexpected ways. [Goodreads Summary]

Why I want to read it: I fell in love with The House at the End of Hope Street and meant to read this one as soon as it came out. Only, it has ended up sitting on my shelf waiting instead. Doesn't this sound delightful? I am sure I will enjoy it! 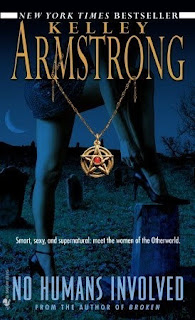 
In her acclaimed Women of the Otherworld series, bestselling author Kelley Armstrong creates a present day in which humans unwittingly coexist with werewolves, witches, and other supernatural beings. Now, in this spellbinding new novel, a beautiful necromancer who can see ghosts must come to terms with her power—and with an evil she never thought possible.

It’s the most anticipated reality television event of the season: three spiritualists gathered together in one house to raise the ghost of Marilyn Monroe. For celebrity medium Jaime Vegas, it is to be her swan song—one last publicity blast for a celebrity on the wrong side of forty. But unlike her colleagues, who are more show than substance, Jaime is the real thing.

Reluctant to upstage her fellow spiritualists, Jaime tries to suppress her talents, as she has done her entire life. But there is something lurking in the maze of gardens behind the house: a spirit without a voice. And it won’t let go until somehow Jaime hears its terrible story. For the first time in her life, Jaime Vegas understands what humans mean when they say they are haunted. Distraught, Jaime looks to fellow supernatural Jeremy Danvers for help.

As the touches and whispers from the garden grow more frantic, Jaime and Jeremy embark on an investigation into a Los Angeles underworld of black magic and ritual sacrifice. When events culminate in a psychic showdown, Jaime must use the darkest power she has to defeat a shocking enemy—one whose malicious force comes from the last realm she expected. . . .

In a world whose surface resembles our own, Kelley Armstrong delivers a stunning alternate reality, one where beings of the imagination live, love, and fight a never-ending battle between good and evil.  [Goodreads Summary]

Why I want to read it: I seem to be stuck in the middle of quite a few series (I can't stop myself from starting new ones, what can I say?) I have enjoyed this series quite a bit and need to get back to it. I bought a copy of this book when it first came out in hardback. 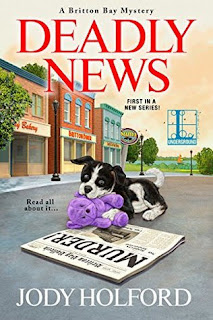 Former Army brat Molly Owens is ready to put down roots, and the picturesque seaside town of Britton Bay on the Oregon Coast seems like the perfect place for it. Especially when she lands a job as editor of the local paper. But she’s got one colleague who’s very bad news . . .

As an experienced journalist, Molly is eager to bring the struggling Britton Bay Bulletin up to speed. But when she pushes Vernon, one of her less welcoming reporters, to dig a little deeper into the story of a prominent local family, the man ends up dead. The fact that he wasn’t well-liked makes finding the killer extra complicated. The lists of suspects range from his ex-wife to his own son to Molly’s boss, who has a secret of his own. But when Molly’s attempts to sleuth out the truth result in her receiving frightening threats, the trouble is just beginning . . .

The one bright spot is Molly’s newfound flirtation with Sam Alderich. The sexy mechanic is used to taking things apart and piecing them back together, and between the two of them they just might be able to solve this deadly puzzle—if Molly can survive peaceful small-town life long enough . . . [Goodreads Summary]

Why I want to read it: If the cute puppy on the cover isn't enough to pull me in, it certainly might be the fact that the heroine is a military brat--something I can relate to. This cozy mystery sounds like fun, and I look forward to reading it. 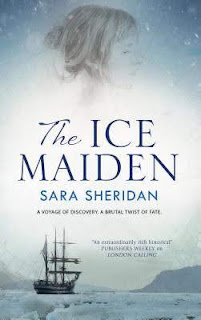 As she stows away on a ship bound for Antarctica, a young woman uncovers a shocking betrayal.

1842. Stranded on Deception Island in the South Atlantic, her whaling captain husband lost at sea, Karina is destitute and desperate. Disguised as a cabin boy, she stows away on a British ship. But Karina is about to get a nasty surprise.

As she grows closer to ship's surgeon Joseph Hooker, Karina and the rest of the crew find themselves pushed to the limits both physically and emotionally as conditions worsen onboard. Engulfed in the chillingly hostile Antarctic landscape, something extraordinary happens - and Karina's story becomes intertwined with some of the 20th century's bravest Polar explorers ... [Goodreads Summary]

Why I want to read it: A woman who disguises herself as a boy, betrayal, Antarctica, and stuck in a dire situation . . . . I must know how it all plays out! 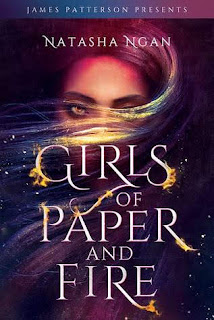 
Each year, eight beautiful girls are chosen as Paper Girls to serve the king. It's the highest honor they could hope for...and the most cruel.

But this year, there's a ninth girl. And instead of paper, she's made of fire.

In this lush fantasy, Lei is a member of the Paper caste, the lowest and most oppressed class in Ikhara. She lives in a remote village with her father, where the decade-old trauma of watching her mother snatched by royal guards still haunts her. Now, the guards are back, and this time it's Lei they're after--the girl whose golden eyes have piqued the king's interest.

Over weeks of training in the opulent but stifling palace, Lei and eight other girls learn the skills and charm that befit being a king's consort. But Lei isn't content to watch her fate consume her. Instead, she does the unthinkable--she falls in love. Her forbidden romance becomes enmeshed with an explosive plot that threatens the very foundation of Ikhara, and Lei, still the wide-eyed country girl at heart, must decide just how far she's willing to go for justice and revenge.

Why I want to read it: I admit the trigger warning which includes sexual abuse gives me pause, but the premise of this new fantasy novel has me wanting to read it just the same. I want to know more about Lei and see her win in the end (I sure hope she wins!). The Malaysian influence on this fantasy novel also is a draw for me.