It's always warm here: I feel as though I've been swallowed by a huge animal. ~ Opening of The Diving Pool 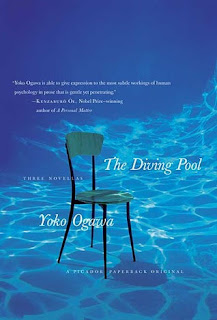 
This was my first experience reading this author. I have had this little slip of a book sitting on my shelf for quite a while now, but am just now getting to it. I have mixed feelings about each of the stories. The first with the same title as the collection, The Diving Pool, about a girl with a crush on her foster brother, took me by surprise in the cruelty of the main character. She is the only child to parents who run the Light House, an orphanage. She has seen children come and go from the home, never quite feeling the sense of family life—or that of a home—she wishes she could have. Something normal. She is lonely and bitter. And at times jealous. Jun, the boy she has a crush on, has lived at the Light House for a number of years, the two growing up together in a sense. As Aya secretly watches Jun, sneaking into the pool where he dives every day, observing him at home and plotting to run into him at various times where they can be alone, she does not realize that Jun is also aware of her. He sees how she treats others and knows she visits the pool where he dives. I was satisfied with the way this story was wrapped up, but overall found it disturbing and at times difficult to stomach.

The second story titled Pregnancy Diary was interesting to say the least. An unmarried woman is living with her sister and her husband. She keeps a diary of her sister’s pregnancy, noting the moment the pregnancy was announced to her sister’s behavior and habits during the pregnancy. The woman records her own feelings of discontent and even disgust and eventual retaliation. The story takes a dark turn, just as the first one did, and the reader cannot help but wonder what is real and what isn’t. Not to mention what it is behind the disturbing thoughts and actions of the narrator.

The final story in this trilogy of novellas, Dormitory, is about a woman waiting for word from her husband about their pending move out of the country. She is feeling restless and lonely when approached by a young cousin setting off to college. He needs a place to stay, and she recommends the old dormitory in which she had once stayed. When she first takes her cousin to meet the landlord of the building, I could not help but feel sorry for the landlord. Armless and with one-leg, he has managed to get along on his own for many years, and yet it is clear he is lonely and his health his beginning to fail. The young wife returns to the dormitory under the guise of wanting to visit her cousin (who is never there), and often falls into conversation with the landlord. He tells her the story of a missing student, the subsequent police investigation, and the decrease in interest in his dormitory by students that followed. The story then takes a weird turn, which I have come to expect from Ogawa. Would this turn into a mystery to be solved or a horror story? I wasn’t sure. The ending was a surprise, and I am still not sure what to make of it.

I imagine each reader could take something different away from these three stories. There is a lot left open for interpretation. When all is said and done, my favorite is probably the first story, even despite how disturbed I was by it, only because I seemed to have a better handle on what that story was about. Did I like this collection? I am not sure I can say yes. Not exactly. These three stories will definitely stay with me awhile though. Haunting, indeed.