Like any Chicago tavern in deep summer, Joe Mulligan's stank. ~ Opening of Girl in Disguise 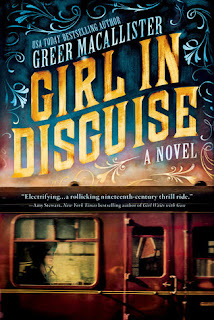 For the first female Pinkerton detective, respect is hard to come by. Danger, however, is not.

In the tumultuous years of the Civil War, the streets of Chicago offer a woman mostly danger and ruin-unless that woman is Kate Warne, the first female Pinkerton detective and a desperate widow with a knack for manipulation.

Descending into undercover operations, Kate is able to infiltrate the seedy side of the city in ways her fellow detectives can't. She's a seductress, an exotic foreign medium, or a rich train passenger, all depending on the day and the robber, thief, or murderer she's been assigned to nab.

Inspired by the real story of Kate Warne, this spirited novel follows the detective's rise during one of the nation's greatest times of crisis, bringing to life a fiercely independent woman whose forgotten triumphs helped sway the fate of the country.

My knowledge of the Pinkerton Agency is very limited. My interest in history tends to lead me outside the U.S. all too often, I confess, something I have been working at changing. Just mentioning the words "first woman" and my ears perk up. Add in "operative" or "detective" to the end of that phrase, and I am sold. As it was, I loved Greer Macallister's The Magician's Lie, which I read a couple years ago. And so it was with eagerness that I pounced on Girl in Disguise as soon as it came out. I bought an e-copy of the book without remembering I had purchased the audio version too. With a long list of books stacked on my TBR pile already, I couldn't wait to dive in and opted to listen to it.

The novel jumps right in: Kate Warne on her first case, hoping to win an official spot on Allan Pinkerton's team. All she has to do is find out where the money is hidden. Kate proves to be more than capable. Not only is she charming, she is also smart and resourceful.

I really appreciated that Kate was not only tough and quick-witted, but also that she was humble and thoughtful. It is clear throughout the novel that her boss, Allan Pinkerton, admired and respected her. I know I did.

I am tempted to say my favorite part of the book were the pre-Civil War days, reading about Kate's various exploits and adventures and seeing her in action because her entire life was fascinating. What she lacked in skills initially, she was willing to learn and perfect. The ease with which Kate donned disguises and learned to use a weapon came with practice, but her charm was surely natural.

Kate's involvement in saving President-Elect Lincoln before his inauguration was tension-filled, and had me hanging on to every word. I had not realized the role the Pinkerton Detective Agency had played during the Civil War, nor it's being the foundation for the start of the Secret Service. The game certainly changed for Kate and her fellow operatives during the war--their main purpose to ferret out spies and to gather information as spies themselves. It was dangerous and deadly. Kate had to make compromises and hard choices.

Macallister captures the historical time period well; including the reception Kate Warne was likely to have received being a woman in a man's role. Not everyone welcomed her with open arms. She had to prove herself time after time.

Little is known about the real Kate Warne, including about her background and relationships. Macallister takes many liberties in both, and definitely uses it to her advantage adding depth and life to the characters in her book. I enjoyed listening to Girl in Disguise, and look forward to Greer Macallister's next book.

To learn more about Greer Macallister and her work, please visit the author's website.