"You are absolutely not selling William Dobson, Rupert!" ~ Opening of A Killer Ball At the Honeychurch Hall 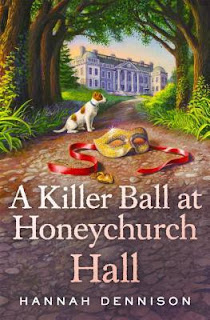 Trying to get her business off the ground, antique dealer Kat Standford is hoping she can convince Rupert and his mother to sell some of their family's artwork. The family is in dire need of money for repairs, and this seems the perfect solution to Kat. But while visiting an abandoned wing of the family's estate, Honeychurch Hall, Kat falls into a hidden room, a double hide, and finds the body of a young woman who appears to have died under suspicious circumstances. Kat's own mother, Iris, seems to have known the victim. And with the reappearance of someone from Iris's past, red flags are going up for Kat at an astounding rate. Could her mother have been involved in the woman's murder? What is her mother hiding? Any why does everyone seem to want to keep the police in the dark?

This is my first visit to Honeychurch Hall and what an entertaining time I had! Honeychurch Hall seems to be a hotbed of scandal, secrets and cover-up with some rather eccentric characters that add to the charm of this series. I had no problem falling right into the small community of Little Dipperton, despite this being the third book in the series. It stands well on its own, although I imagine there are some threads mentioned in this one that likely got their start in an earlier book.

I rather like Kat, who is smart and funny. She's still recovering from her break up with her ex -boyfriend from the sounds of it, but there were small hints of another possible romantic prospect. I wasn't sure what to make of Iris, Kat's mother. The two seem to have a complex relationship. It's clear they love each other, but Iris's evasiveness, especially about her past, bordered on being annoying at times. Still, I quite liked her character and found her more amusing than anything else. Iris and her brother, a parolee recently out of prison, make a comedic pair to be sure.

The mystery itself was intriguing, tied closely to the Hall's past. I had no idea what direction author Hannah Dennison was going with it, although I had my suspicions. A Killer Ball at Honeychurch Hall had me laughing and kept me guessing all the way to the end. This was such a fun book to read. I can't wait to read more of this series.