The locomotive engine belched billowing clouds of steam, a black-iron dragon chained to the tracks. ~ Opening of Delia's Shadow 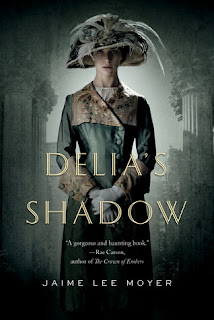 The majority of you who voted in my TBR List poll chose Delia's Shadow by Jaime Lee Moyer as my February read, and I cannot thank you enough.

Delia Martin left her comfortable life in San Francisco behind in an effort to avoid the dead who haunt her, taking a job as a teacher on the East Coast. She is drawn back, however, by a ghost who has traveled a long way to ask for her help. Only Delia isn't sure what help she is being asked to provide exactly. Things begin fall into place when she arrives back in San Francisco. Her best friend's fiancé and his partner are in the middle of a serial murder investigation that has them stumped and frightened. The murders are growing more grisly and personal. And they are eerily similar serial murders that took place thirty years before. Could they be connected? Is it the same killer?

The ghost haunting Delia is becoming more powerful, and Delia is intent on finding out what she can about the woman's death and in stopping a killer from claiming anymore victims. The police are desperate for answers and Lieutenant Gabe Ryan is willing to do anything, including using unusual methods to catch the killer--like using a psychic.

Delia's Shadow has a strong sense of place. I have long been enamored with the city of San Francisco and its history. The novel is set nine years after the Great San Francisco Earthquake and Fire of 1906, just in time for the Panama–Pacific International Exposition. The author paints a realistic portrait of the city during that time period. It was hard not to feel a part of it. Delia and Gabe are no strangers to loss, both having lost loved ones in the earthquake and fires that followed. While Delia has come to terms with the past, Gabe is still struggling to do so, unable and unwilling to completely move on. There is something about Delia, however, that awakens something inside him, and those strings to the past begin to loosen.

I quite liked Delia and her friends (although I wasn't too fond of Isadora, who I just didn't connect with at all). She has been able to see ghosts since childhood, and it became unbearable right after the terrible earthquake and fire that took her parents. She could not go anywhere without seeing ghost upon ghost. Returning home brings much of that back for Delia, but she uses it to her advantage, trying to learn to control her gift, and find justice for the victims of a serial killer.

The mystery is quite dark. The killer has the upper hand for much of the novel and even I was beginning to wonder if the good guys would ever find the murderer. The ghosts added to the atmosphere of the novel, making it all the more creepy and raising the stakes higher. I enjoyed every minute of it! Even so, I would not have minded more insight into the murderer, even beyond what was offered. While the romance plays a part in the novel, it isn't its strongest asset, I didn't think. I really liked both characters involved and hoped they would come together, but it took me awhile to buy into the romantic thread of the story.

Overall, I enjoyed Delia's Shadow quite a bit. I was happy to discover there are two more books to look forward to, featuring the same characters.


To learn more about Jaime Lee Moyer and her work, please visit the author's website. She can also be found on Goodreads and Twitter.