When French perfumer Danielle Bretancourt steps aboard a luxury ocean liner, leaving her son behind in Poland with his grandmother, she has no idea that her life is about to change forever. ~ Opening of Scent of Triumph 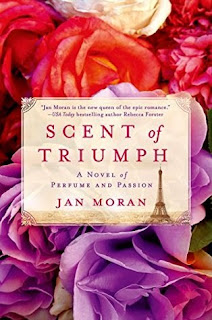 When French perfumer Danielle Bretancourt steps aboard a luxury ocean liner, leaving her son behind in Poland with his grandmother, she has no idea that her life is about to change forever. The year is 1939, and the declaration of war on the European continent soon threatens her beloved family, scattered across many countries. Traveling through London and Paris into occupied Poland, Danielle searches desperately for her the remains of her family, relying on the strength and support of Jonathan Newell-Grey, a young captain. Finally, she is forced to gather the fragments of her impoverished family and flee to America. There she vows to begin life anew, in 1940's Los Angeles.

There, through determination and talent, she rises high from meager jobs in her quest for success as a perfumer and fashion designer to Hollywood elite. Set between privileged lifestyles and gritty realities, Scent of Triumph is one woman’s story of courage, spirit, and resilience.

The World War II setting is what drew me initially to this novel. I am not big on fashion or even perfume, but I do enjoy a good story about a woman overcoming hardships and landing on her own two feet. One good thing about a historical fiction novel that involves fashion is how much it can contribute to the setting, both the location and the time period. And that was true in this case.

I admit to being a little put off at the beginning by the strong attraction between Danielle and the sea captain, Jonathan Newell-Grey. Danielle is a happily married woman who has just left her young son in a country that is at risk of being invaded by the Germans. The long glances and the lingering touches bothered me, and I wasn't immediately inclined to think much of Danielle as a result. I worried they were going to wind up having an affair--and that was not the kind of book I particularly wanted to be reading.

I remember reading Katherine's review of this book before I had purchased it, and she referred to it as bordering on a soap opera--and it certainly did that. Between the miscommunication, mistakes made, the constant dilemmas arising just as things seem to be falling into place, the various romances, and the over the top story line involving assassins that, while entertaining, seemed a bit too hard to believe--there was a lot of drama within the pages of the novel.

The author takes the reader back and forth between various characters, including Danielle's son and mother-in-law, her husband, Jonathan, and Danielle, with most of the focus being on Danielle's story. It works well in this book, offering a more world view of what is going on in the characters' lives. I cannot even imagine what it must have been like for Danielle and her husband to leave their son behind, especially knowing the political situation in their country and neighboring Germany was so tenuous. And then when Hitler marches into Poland . . . As a mother, my heart hurt so much for Danielle. Not knowing what is happening, not being able to protect her son, not being able to rush to his rescue. I longed for news on both Danielle's son and her mother-in-law, hoping the author would hurry back so I could check up on them.

Danielle will do anything to find her son, but, of course, there are obstacles and only so much a woman at that time could do. She must rely on others to help her. When her husband goes off to Poland to find their son, she returns to her family home in France to wait where she thinks she will be safe until she can't wait any more.

I found this novel slow moving in spots, but mostly I was glued to the pages, fascinated by Danielle's life and everything that was happening to her and her family. I think my favorite part of the novel was when she first moves to the United States, two children and her invalid mother in her care, with hardly any money to speak of.  She could have asked friends for money, but she chooses not too, knowing she must rely on her own skills and intellect if she is going to survive for long. This was Danielle at her lowest and at her best, I think. It was then I admired her the most. There were a few instances throughout the book in which I wanted to shake some sense in Danielle, but overall, I grew to like her character, even if I didn't always agree with her choices.

The author does a good job of putting the reader into the various locales in which the book takes place. I loved the time spent in France, could feel the desperation of Poland, and  being a part of the magic of Los Angeles in the 1940's. It was such an interesting time in history, and Jan Moran manages to fit so much into her novel.

It was impossible not to become emotionally invested in the characters and their stories. This is a book that takes on a lot of serious issues, from war and loss to drug abuse and poverty to regret and heartache. There were many moments of heartbreak and anguish in which I found myself tearing up. Through it all, however, there was hope. Danielle proved a resourceful and capable woman during the toughest of times, and she never gave up hope of finding her son.

The ending was true to the novel, which are the kinds of endings I like best. While Scent of Triumph will not make my favorite book of the year list, I did enjoy it overall.

Source: I purchased an autographed copy of this novel at the L.A. Times Festival of Books for my own reading pleasure. I also own an e-copy, which I purchased as well.