I cannot believe August is at an end. We are about to enter my favorite time of year, the final four months of the year. I love the festiveness of the fall with Halloween and Thanksgiving, leading into the Winter Solstice and Christmas. Mouse has already decided what she wants to be for Halloween. I am hoping she will change her mind. I know I need to start thinking about Christmas presents, but my mind isn't ready to go that far yet. My mom is planning a visit towards the end of September, we are attending a Quinceañera (which I still need to shop for--Mouse wants glass slippers, but I do not think I'll be able to manage that), and my brother and his wife will be coming in October. I am sure we will be fitting in a visit from the in-laws somewhere in there as well. I am seriously thinking of inviting everyone to our house for Christmas, but I am not sure how long that thought will last. I make a terrible hostess--most of all because I hate taking on that role. And it would be easier than traveling and deciding whose turn it is we would spend the holidays with. Anyway, that's still a ways away.

There is still almost a month of summer left. The temperatures outside will not let me forget it either. Mouse's swim lessons ended on a high note, thank goodness. The Saturday before last was also the final soccer class of the summer season. Mouse has come so far since she first began playing two years ago. She's decided she wants to try gymnastics, and so she will be taking a break from soccer for a tumble and dance class. She's very excited.

It has been a stressful month to say the least. Work, health issues, and Parker's poor health. The tests have been endless, or so it seems. It's much worse from his perspective, I am sure. He is scheduled to have surgery Tuesday to have his tumor removed. The tumor started out as a little bump and has grown quite rapidly in the past four months. Just in the last couple days, it's grown. Even ruptured. As if Parker licking it to the point of bleeding wasn't enough. The estimate for the surgery and biopsy was enough to make my jaw drop (although I did know it would be expensive). We never invested in pet insurance for him--but I think we will be doing so for our younger cat. 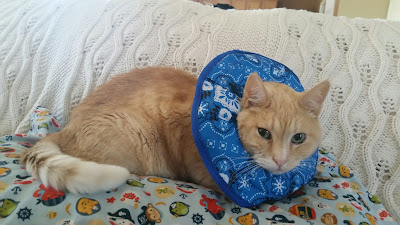 On the reading front, I finished listening to The Girl on the Train finally. Although I had already been on the right track (no pun intended), I was still disappointed when I came across a spoiler. As someone who often guesses the whodunit at the end of a mystery or crime thriller, I still take pleasure in the anticipation of finding out if I am right. So, that was kind of a bummer.

I was going to start on The Daughter by Jane Shemilt, but I ended up beginning Fredrik Backman's My Grandmother Asked Me to Tell You She's Sorry, which is proving to be a delight to read. I think it was the right choice given my state of mind.

How did August turn out for you?  Does anything in particular stand out?

What was your favorite August read?