Mouse's Corner: A Wrinkle in Time by Madeleine L’Engle, A Guest Post by Alexandra Sokoloff

I am excited to host author Alexandra Sokoloff here on Musings of a Bookish Kitty today as part of her Cold Moon Blog Tour. I considered doing a book review, but ultimately thought it would be more interesting and fun to invite her over to discuss one of the most influential books from her childhood. I was happy when she took me up on her offer, and said she wanted to talk about Madeleine L'Engle's A Wrinkle in Time. This is one of those mus read books I hope my daughter will want to read one day.

Alex has written many books over the years, her most recent being the Huntress/FBI series, which I have read and enjoyed over the past couple months (Huntress Moon, Blood Moon, and Cold Moon). I enjoyed this dark and intense series quite a bit as it took me into the mind of a female serial killer and the FBI agent tracking her down.

For this stop on my Cold Moon blog tour, Wendy asked me to do a guest post on an influential book from my childhood. Easiest question in the world! 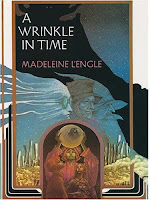 It’s the story of thirteen-year-old misfit Meg Murry, who on a dark and stormy night is visited by three mysterious and iconically eccentric women who transport her, her child prodigy brother Charles Wallace, and her high school crush Calvin O'Keefe, on a cosmic adventure to rescue her scientist father from the evil forces holding him prisoner on a distant planet.

Famously, when author Madeleine L’Engle finished the book in 1960 (pre-YA is putting it mildly!) it was rejected by at least 26 publishers, because it was "too different", and "because it deals overtly with the problem of evil, and it was really difficult for children, and was it a children's or an adults' book, anyhow?" Oh, and “It had a female protagonist in a science fiction book.”

I’m eternally grateful to whatever forces of light were looking out for it.

When people ask me why I write what I do, or even just why I write, instead of rambling on, I could just as well just say A Wrinkle in Time. Countless female author and screenwriter friends, and a good number of the men as well, have said the same thing to me over the years—I suspect just about every woman genre writer who came of age pre-Harry Potter. Meg Murry wasn’t just our Hermione – she was our Harry Potter, too. She is every smart girl who ever lived. We didn’t just read that book—we lived it. We are Meg.

I’ve read just about everything L’Engle ever wrote. Once in a while I realize I’ve missed something and it’s always a treat to add that book to my shelf. She was a huge part of my extremely random spiritual education… in fact she might have been singlehandedly responsible for any spiritual sense I did have in my childhood and early adulthood. I was raised with both no religion and a smattering of a large number of religions. My parents took me and my siblings to Native American ceremonies, Orthodox celebrations, and Hindu holy days. If I spent a weekend night with a friend whose family had a religious practice, they’d drag me along to church or temple. But I was never sold on the idea of a single male God (I mean, come on, really? I love men in general, but omniscient? Let’s just look at the facts, here!).

Then A Wrinkle in Time introduced me to the concept of the Goddess, in the three “witches”: Mrs. Whatsit, Mrs. Who and the very intimidating Mrs. Which. That powerful, eternal feminine triumvirate, whether you describe them as former stars, guardian angels, messengers, centaurs (don’t you love that scene where the three children try to explain them to Mr. Murry?) —is to me the Triple Goddess. It was the most positive depiction of spirituality I’d ever encountered, and the one that made the most sense to me: that the universe manifests itself in guardians, and we are watched over, and we are loved.

(L’Engle herself was a devout Christian, yet the book often appears on the American Library Association list of the 100 Most Frequently Challenged Books, because of references to witches and crystal balls, because it "challenges religious beliefs", and because Jesus appears on a list of “names of great artists, philosophers, scientists, and religious leaders".)

L’Engle’s equally profound influence on me (it’s inseparable, really) was as a genre writer. I always gravitated toward the spooky, the thrilling, the fantastical, the twisted, in my reading. I discovered A Wrinkle in Time when I was in sixth grade and something in my mind said – “THIS is what a book is supposed to be, do, feel like.” It’s a thrilling adventure with flawed but deeply moral characters, fighting for cosmic stakes. While you’re reading you experience it as a breathless, nail-biting ride, but the moral implications imprint on your soul.

In fact, I was so obsessed with the book the year I first read it that I wrote a movie adaptation of the book. This was a pretty radical and prescient thing for me to have done (at age ten!), considering a lot of adults don’t even understand that there is such a thing as an adaptation process from book to screen. I had no inkling at the time that I would grow up to work as a screenwriter and make a living adapting novels for screen. And no desire to, either.

It was just that book. I wanted to live in that book. I wanted to somehow create the world of that book around me. I’m not sure I’ve ever read anything ever since (except, um, Hamlet) that feels as perfect in every way – character, theme, structure, dialogue, action, spectacle, catharsis – every single layer and detail.

I’ve read it dozens, maybe hundreds of times, and I learn something new about how to tell a story every single pass. And not just about the how of it, but the WHY as well. It makes no sense on the surface to write as dark as I do and say that I aspire to the spirituality of that book, but it’s true.

As L’Engle said:
“Why does anybody tell a story? It does indeed have something to do with faith, faith that the universe has meaning, that our little human lives are not irrelevant, that what we choose or say or do matters, matters cosmically.”

At the moment, I fully admit, I am struggling with Book 4 of my Huntress Moon series. These are very dark books. They confront crimes so heinous that I think they can only be called evil. My FBI protagonist is on the verge of giving up entirely; he feels so powerless in the face of what he’s being exposed to. But these crimes exist. Someone must face them and fight them. And once again, I’m looking to A Wrinkle in Time to remind me that even in the darkest abyss, the universe manifests itself in guardians—and we are watched over, and we are loved.

There are other books of L’Engle’s that shaped me as a writer, an author, a genre writer. She wrote thrillers: Arm of the Starfish is a wonderful YA spy thriller, again with a profound spiritual dimension, and even her dramas have such an thriller edge – I’m thinking specifically of A Ring of Endless Light – that I’d almost call them cross-genre. She put urgency and cosmic stakes into everything she ever put on paper.

But A Wrinkle in Time is a masterwork… and I guess it’s always in the back of my mind, the question – will I ever be open enough, focused enough, skilled enough, mature enough… enough anything – to write something that is everything I could write, in a perfect world?

I don’t know. But at least I have a light to guide me on that path.

So how about you, readers and authors? Do you have A Wrinkle in Time experiences? Or was there another book that most influenced your childhood and/or writing?

The Huntress/FBI Thrillers: Out now!

Alexandra Sokoloff is the bestselling, Thriller Award-winning and Bram Stoker and Anthony Award-nominated author of eleven supernatural, paranormal and crime thrillers. The New York Times has called her "a daughter of Mary Shelley" and her books "Some of the most original and freshly unnerving work in the genre."

As a screenwriter she has sold original suspense and horror scripts and written novel adaptations for numerous Hollywood studios (Sony, Fox, Disney, Miramax), for producers such as Michael Bay, David Heyman, Laura Ziskin and Neal Moritz.

To learn more about author Alexandra Sokoloff and her work, please visit the author's website or her blog . You can also find her on Facebook, Twitter, Goodreads.

I hope you will take time to visit some of the other tour stops along the way! 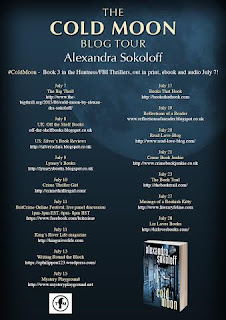