He'd stopped trying to bring her back. ~ Opening of Eleanor and Park 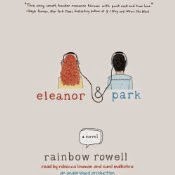 I generally do not gravitate towards young adult romance novels, but I wanted to see what all the fuss was about Rainbow Rowell's Eleanor and Park. Many book bloggers I know loved this one, and some didn't. What would I think?

I chose to listen to the audio version and am glad I did.  Even if it did take me five months to listen to it. It's not the book's fault.  Really, it isn't. For the first half of the book, I was listening every chance I got, and then suddenly I wasn't. I couldn't find the time but in fits and spurts.  I hate listening to an audio book that way, and so I opted not to listen at times I probably could have. I'm a terrible audio book listener.

But that's neither here nor there. You want to know about the book.

Eleanor... Red hair, wrong clothes. Standing behind him until he turns his head. Lying beside him until he wakes up. Making everyone else seem drabber and flatter and never good enough...Eleanor.

Park... He knows she'll love a song before he plays it for her. He laughs at her jokes before she ever gets to the punch line. There's a place on his chest, just below his throat, that makes her want to keep promises...Park.

Set over the course of one school year, this is the story of two star-crossed sixteen-year-olds—smart enough to know that first love almost never lasts, but brave and desperate enough to try.

Narrated by Rebecca Lowman and Sunil Malhotra, playing the parts of Eleanor and Park, I fell in love with the characters and their story almost immediately. I adored Park and Eleanor, and could relate to both of them in one way or another. Eleanor is the girl I wish I could have been. Even with her insecurities and dysfunctional family, there was a strength and confidence about her that drew me to her. She was honest and smart, thoughtful and real. It is obvious she is a fighter, especially given her family situation--a mother who obviously loves her but is unable to protect not only her children but also herself from an abusive and alcoholic husband, Eleanor's stepfather. Not to mention the negativity she faced at school from her peers. My heart ached for her much of the time, and yet I also knew she would be okay somehow.

Park, raised by two loving parents, has his own battles to fight as he begins to come into his own, even when it goes against what his parents expect and want from him. Park is such an easygoing character, smart in his own right, and a good friend. Park may have been apprehensive about befriending the new girl at first, but I appreciated that he looked beyond what everyone else might think and followed his own heart and path.  The two complement each other, Park bringing out the best in Eleanor and her in him.

I think it was smart on the author's part to have the two running narratives throughout the book, allowing the reader into the thoughts of both Eleanor and Park. It helped me see what each of the characters saw in each other, and I couldn't help but fall in love with them too. I felt their frustrations and heartache, I wanted to shake them when they were being dumb, and I wanted to wrap them both in my arms and hug them. I wanted to protect Eleanor, to save her.

I also like that the author chose to set the novel in 1986. I enjoyed the pop culture references, even though I was a bit younger than Eleanor and Park at that time. The use of cassette tapes to record music and messages for each other was something my husband and I did early on in our relationship (admittedly, that was in the early 1990's). I was never into comic books growing up, but I am sure my husband was.

I am not one to remember or jot down quotes generally, but with this book, there were several that touched a chord with me--and, darn it, because I was listening to the audio, mostly while driving, I couldn't exactly write them down or highlight them so I would remember. Some of those quotes made me smile and others that made me melt a little inside, remembering when I fell in love for the first time, not to mention how intense and all-consuming it was.

There were very few surprises in Eleanor and Park. No unexpected twists I did not see coming.  And that was okay. I was lost in the romance of the story. I would not have minded knowing more about Eleanor's family history than was offered, but this did not hurt my enjoyment of the book. And I would not have minded more depth in regards to Eleanor's family--I worried most about her siblings. The love story between Park and Eleanor was obviously the main focal point of the novel. And even then, Eleanor was at its center in many ways. Her story was the most compelling, certainly.

I do not know if this is a book I would have enjoyed as much in print as I did listening to the audio. It isn't a book I would have picked up to read had it not been highly recommended by so many of my bookish friends. I had my doubts going in but was more than pleasantly surprised by the outcome.

Source: I purchased the audio version of this book for my listening pleasure.