"You just got out of jail? Seriously?" ~ Opening of Shady Cross 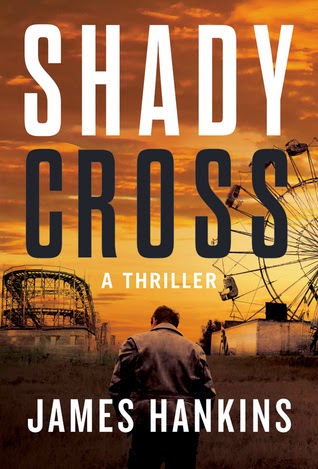 In one hand, small-time crook Stokes holds a backpack stuffed with someone else's money -- three hundred and fifty thousand dollars of it.


In the other hand, Stokes has a cell phone, which he found with the cash. On the line, a little girl he doesn't know asks, "Daddy? Are you coming to get me? They say if you give them the money they'll let you take me home."

From bestselling author James Hankins comes a wrenching story of an unscrupulous man torn between his survival instincts and the plight of a true innocent. Faced with the choice, Stokes discovers his conscience might not be as corroded as he thought.

The description is what initially drew me to this novel, which is kind of ironic given I generally avoid child abduction stories.  Just goes to show, I suppose, that there are exceptions to every rule. Shady Cross once began as a idyllic place, beautiful and a haven for those who lived there. As time passed, it became less so, "shady" no longer meaning what it once did.


I knew going in that Stokes is not what I would call a nice man.  He doesn't like to get attached and he gave up on earning an honest living long ago.  When he comes across a bag of money, he is serious about running with it even despite the debt he owes one of the two Shady Cross loan sharks and even despite the girl whose only hope of rescue is no longer available.


The kidnappers are serious though. They want their money and the evidence the girl's father has taken from them. For every misstep made, the girl will come to harm.  It doesn't take long for Stokes to figure out just how true that is--and it's finally what proves there might be a heart beating inside his chest after all.

I enjoy a good anti-hero now and then, and Stokes certainly fits that bill. I will not pretend I liked Stokes by the end of the book, not exactly, although I didn't hate him either. I wanted him to come out on top.  Stokes isn't the easiest to like--but I appreciated how honest he was about the kind of person he is. And I came to have some respect for him, for the efforts he went through to help that little girl. He may not have been the best of men, but he wasn't the worst of them either. He really did want to do the right thing in the end.

One aspect of the book I liked in addition seeing Stokes grow as a character, was the juxtaposition of his situation and what he was trying to do with those he went to for help.  Just because someone is an upstanding citizen on the outside, doesn't mean that person actually is underneath. For all that Stokes was a shady character, those who were supposed to be better than him were sometimes worse.

There is much in the way of twists and turns in this book, many of which are unexpected. I had a couple different theories about how it would all turn out as I read, some of which was correct  and others came as a surprise.  Shady Cross definitely earns its thriller label. There was only one scene in the novel that made me queasy, in which I wondered if I could read on, but my desire to see good prevail over evil was strong. I am glad I stuck to it.

Shady Cross by James Hankins is gritty and suspenseful.  I enjoyed it quite a bit.  Stokes is racing against the clock, and Hankins does a good job of keeping up the intensity of events as they unfold. It was a hard book to tear my eyes away from, I just had to know how it would all turn out.

I hope you will check out what others had to say about Shady Cross on the TLC Book Tours route!