Paisley Munro tried not to gawk at the two broad-shouldered men in kilts as she hefted her suitcase off the luggage carousel in the Inverness Airport, located northeast of the city referred to as the capital of the Scottish Highlands. ~ First Sentence of A Highlander's Obsession 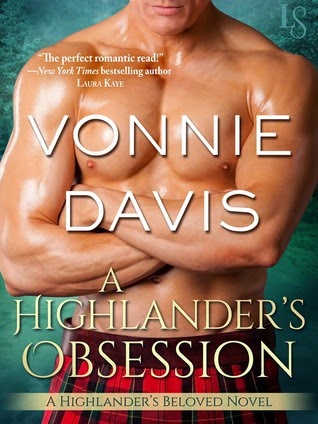 While not a huge highlander romance fan, I have enjoyed a few. Throw in a paranormal element, and I'm even more likely to give it a try. I bought and read this book in preparation to read the second book in the trilogy, which I have for review in April. This can easily be read as a stand alone, for those who do not like series books or read out of order, but for the full effect, I recommend you read the books in order.

Paisley and her grandmother, Effie, have traveled from America to Scotland to attend a funeral for the reading of the will.  Effie has no idea she is set to inherit quite a bit of land, land that is precious to the local shape-shifter clan.

Paisley views her ability to hear and talk to animals as a curse rather than a gift. The only person who has ever been completely accepting of her gift is her grandmother, an eccentric women with her own magical secrets.  Paisley is stunned when she discovers that she can hear the thoughts of Creighton Matheson, the head of the Matheson family and lodge.  He is also the clan leader and has been lead to believe Paisley and her grandmother cannot be trusted.

When Creighton sees Paisley for the first time, he cannot deny the attraction. The more he gets to know her, the more he wants to trust her, and the more his inner bear demands she is his.  How will Paisley react to knowing his true nature? Why is it she can hear his thoughts? Are she and her grandmother to be trusted?  Meanwhile, Paisley fights the growing attraction she feels for Creighton. She is engaged to another man, and her sense of loyalty is strong even despite the more business like feel of their engagement.

I really liked Paisley. She does not appear to be a strong character on the outset, always pushing her glasses up on her nose (I do this too--even when I am not wearing them), but she is quite feisty when pushed. She and Creighton have good chemistry, even if everything seems to happen so fast. I liked Creighton as well; he has that alpha male protective vibe to him, which I don't mind--but what I loved most about him was his willingness to defer to Paisley and listen to her when it came to making decisions.

There was only one moment in the book in which I rolled my eyes and voiced my dismay to my husband. Something Creighton does that I personally find difficult to forgive--and which I won't give away because it'd be a spoiler.  Still, in the scheme of things, I understand, even if I don't agree with, his reasoning and am glad he ultimately realized why he was wrong. I am not sure I would have been as forgiving as Paisley at least not without a good punch in the nose.

My absolute favorite character in the novel is Effie with her pink hair and pelican baffies (slippers). So wise and so hilarious. You can't help but love her and her eccentricities.  There's definitely more to her than what meets the eye.

This was a fun book to read. At times it was funny and at others intense given the circumstances the characters faced. While the romance between Creighton and Paisley are at the heart of the novel, there are also the matters of a curse, kidnapping, a murder attempt and issues of betrayal. There was plenty of suspense, which always makes a romance novel even better in my mind.

Source: I purchased this e-book for my own reading pleasure.