Bookish Thoughts: The Last Train to Babylon by Charlee Fam

The rain assaults my car in the far corner of the empty train station lot, and the wipers dance to a furious beat, so awkwardly out of sync with everything else. ~ Opening of Last Train to Babylon 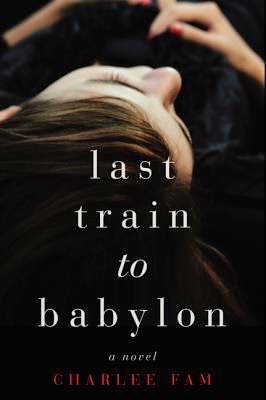 Last Train to Babylon is written from the point of view of Aubrey Glass, a twenty-three year old journalist, whose seemingly carefully controlled life is revealed to be hanging by a thread when she learns of her former best friend's suicide. Charlee Fam takes her characters back and forth between the present and past as Aubrey relives what she has tried so hard to block out and pretend didn't impact her.  Aubrey returns home with every intention of not attending the funeral.  Running into old friends and her old boyfriend, Adam, brings it all back . . . every painful detail.

It is is clear from the beginning that Aubrey is suffering; the multitude of suicide notes, her detachment from those closest to her, and her heavy drinking give her away. I admit to not being particularly fond of Aubrey initially. She and her friends, particularly Rachel, her former best friend, make several bad choices. Perhaps it was hard for me to relate to them because I was a different type of teenager. My focus was always on academics, whereas these girls were much more into the party scene, including drinking and sex. I can't tell you the number of times in this book I worried for the girls, especially Rachel, going off with boys, many of them older, after having had too much to drink, her cell phone turned off.

As the novel progressed, Aubrey grew on me, and I really came to care about her. At times she came across as self-centered, but, really, what teenager isn't, at least some of the time?  Even as an adult, Aubrey was not the nicest person to those around her--and I think that had, in part, to do with what she was dealing with--not to mention the excessive drinking. It was difficult to see her on her downward spiral, and yet, it was something she had to go through in order to get to a point where she could face her past, face her pain. I hurt for her. I cried for her. Her emotions and suffering were raw and authentic. The author did an amazing job with that.

I have mixed feelings about Rachel, Aubrey's former best friend, although mostly I did not like her. Aubrey painted a very negative picture of Rachel, about how controlling she was and how manipulative. There were aspects of her character I wanted to know more about to better understand where she was coming from. I wish the author had gone one step further in that regard. But I do understand why she did not. This is not Rachel's story.  It is Aubrey's, about her coming to terms with events from her past.  What we do learn about Rachel is a lot, just the same. While I never warmed to her, I did feel sorry for her in some ways. She was a train wreck waiting to happen. Yes, she could be manipulative and cruel. What I saw beneath that, however, was a girl who was trying too hard, and who, on the outside, appeared to have it all together, but was struggling with her own issues.

Last Train to Babylon would make a good book club pick, I think. There is so much in the book worth discussing; relevant issues for today dealing with post traumatic stress, the complexities of friendship and young love, date rape, and underage drinking and sex, just to name a few. Charlee Fam has proven herself to be a talented author, taking such difficult subject matter, weaving dark humor into it, and giving voice to young women everywhere who have shared similar experiences with those in this book. The Last Train to Babylon was an emotional read, and one I am glad to have read.


To learn more about Charlee Fam, and her book, please visit the author's website.

I hope you will check out what others had to say about The Last Train to Babylon on the TLC Book Tours route!