Landon Downey clutched the baby name book From Abba to Zed to his chest and knocked on his girlfriend's dorm room door. ~ Opening Sentence of The Millionaire Affair 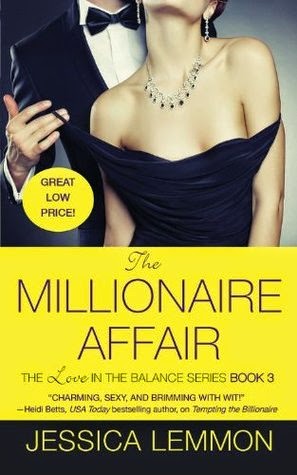 Millionaire ad executive Landon Downey has a policy: no romantic relationships allowed. So when he's saddled with his six-year-old nephew for a week, he doesn't think twice about asking Kimber Reynolds to act as live-in nanny. What he doesn't expect is the undeniable attraction to the woman he hasn't seen since they were kids. And not only does she like him back-she suggests they work their way down a list of extracurricular activities in the bedroom. How can he resist?

Kimber wants to prove once and for all that she can love 'em and leave 'em with the best of them. All she has to do is keep her sixteen-year crush on Landon out of the equation. No problem . . . until she realizes she may not be the only one whose heart has gotten completely tangled up in their no-strings agreement.

I hate that in the description of this novel it describes Landon as being "saddled with his six-year-old nephew".  Landon may be a workaholic--he's a millionaire for a reason, after all.  However, he dearly loves his nephew, and I doubt he would consider himself saddled with the sweet boy.  Unfortunately, he's in the middle of an important ad campaign and cannot devote the time and attention to his nephew that he sorely wishes he could.  In steps his sister, Angel, who pushes her friend, Kimber, in Landon's direction.  Kimber isn't exactly a nanny.  Rather, she owns her own small business, alongside her ex who she would love to buy out.  The offer, however, is too good to pass up.  The money she'll make for a week of babysitting will make a huge dent in her effort to finally get rid of her ex-boyfriend.

Both Landon and Kimber have their own relationship issues.  A long ago betrayal has turned Landon off getting close to any woman.  His last girlfriend and he had a mutual business agreement to date--more a case of being each other's arm candy rather than being part of a more meaningful relationship.  Kimber, on the other hand, has always been quick to throw her entire heart into a relationship only to have it stomped on by the men she falls for.

When Landon offers Kimber the job, and Kimber moves in for the week, the sparks fly.  It's clear the two have the kind of chemistry that will be hard to ignore.  I admit I was put off at first by the lust that oozed from the two characters every time they saw each other, but either I got used to it or it leveled off once the two finally consummated their arrangement.  In an effort to prove that she could keep her heart out of it, that she could have a fling, a simple affair, Kimber comes up with the idea of creating a list of ten "bedroom" activities, that once they've worked through, means the end of their affair.  Landon is quick to agree.  After all, he doesn't want to give in to his heart.

I expected the life span of the list to last longer than it did, but to the author's credit, it was only the catalyst to an otherwise bigger story.  Kimber and Landon find themselves falling for each other, despite their best efforts not to.

I really enjoyed this book.  I appreciated the author taking her time getting the characters together, and especially the depth she put into their creation.  I liked both Landon and Kimber and found myself rooting for them from the start.  They seemed like (mostly) real people with real problems.  I also really liked the minor characters, including Landon's family.  Their interactions with both Kimber and Landon made the novel all the more enjoyable.

I thought Jessica Lemmon was able to show Kimber and Landon confronting their own issues in a mature way.  There was no quick fix or love will conquer all attitude.  The characters really had to work through their pain and reluctance.  The author didn't make it easy for them.  And yet, in true romance novel fashion, even from the start, I knew there would be a happy ending.

Note: This is the third book in the author's Love in Balance series, which I didn't realize when I began this book.  It is a stand alone, however, and knowledge of the other two books is not necessary.

You can learn more about Jessica Lemmon and her books on the author's website.