"Not a pretty way to die, Alexandra." ~ Opening to Terminal City 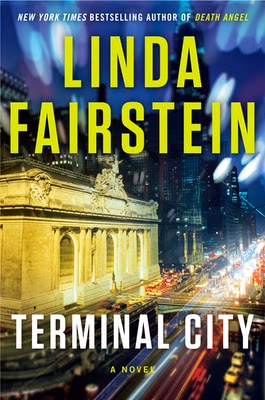 Linda Fairstein is well-known for illuminating the dark histories in many of New York’s forgotten corners—and sometimes in the city’s most popular landmarks. In Terminal City, Fairstein turns her attention to one of New York's most iconic structures—Grand Central Terminal.

Grand Central Terminal is the very center of the city. It’s also the sixth most visited tourist attraction in the world. From the world’s largest Tiffany clock decorating the Forty-Second Street entrance to using electric trains since the early 1900s, Grand Central has been a symbol of beauty and innovation in New York City for more than one hundred years.

But "the world’s loveliest station” is hiding more than just an underground train system, and in Terminal City Alex Cooper and Mike Chapman must contend with Grand Central’s dark secrets as well as their own changing relationship.

Linda Fairstein's Alexandra (Alex) Cooper series is one of the few I am nearly on top of (I could swear I had read last year's release, but evidently I haven't--must this soon!).  Terminal City is the sixteenth book in the series.  What I love most about Fairstein's books is the history of the landmarks in which her crimes often take place, and Terminal City has history in spades.  It is what I loved about the book, but also what pulled it down, I think.  It was a little too much, at times overpowering the murder investigation itself.

For those unfamiliar with the series, Alexandra Cooper is an Assistant District Attorney in charge of the sex crimes unit.  She is often paired up with her two good friends, Detective Mercer Wallace and Detective Mike Chapman.  Mercer plays less of a role in this novel than he has in the past, whereas Mike takes his usual seat, with the usual teasing and joking manner.

While each book in this series can be read as a stand alone, there is definite back story which would make series purists more likely to want to start at the beginning.  One of the features I like best about this series is how Alex doesn't start out as a fresh "character" with each novel.  The wear and tear and horrors she faces with each book build on her.  The relationships she has with her colleagues has also evolved over the course of the series.  In many ways, this book had threads of both, which I don't feel would hinder one's enjoyment of the book, but may make the reader feel a little behind.

I appreciated the tension between Alex and Mike as they sort through their feelings about their changing relationship.  Their history and their professions are challenges they both will have to continue to work through if they want to make a go of it.

I enjoyed reading about the more minor side cases that Alex or her team are working on in each of Fairstein's novels.  They rarely take center stage in the books, but I find them interesting, nonetheless. In Terminal City, Alex is up against a police officer accused of intending harm to his family and other women.  It causes quite a stir given the circumstances of the case.  When does fantasy cross the line into becoming a crime? This fictional case in Fairstein's novel is based on a real life case (which, of course, I had to research).

As for the main story line in Terminal City, Alex is called in late one night after a body is discovered in a hotel room.  When another body is found on the streets with a similar calling card, the authorities believe there must be a connection between the two murders.  It seems impossible they'll ever be able to get to the bottom of the murders the more they uncover--and discover what they do not know.  The case took a couple interesting twists in the novel, and I found myself wishing there had been more focus on it and less on the history of Grand Central Station, as interesting as it was.  There was, of course, the classic climatic scene in which Alex's life is in danger, a regular staple in a Fairstein novel.  At least this time it wasn't because Alex decided to take on the killer alone.  She really wasn't trying to get in the way this time.

Overall, I enjoyed Terminal City, even with its flaws.  Maybe it is my attachment to the characters and their fates and my interest in history.  Like with every series, some books are bound to be stronger than others.

To learn more about the Linda Fairstein and her books, please visit the author's website.

Source: Review copy provided by publisher via the First to Read Program.