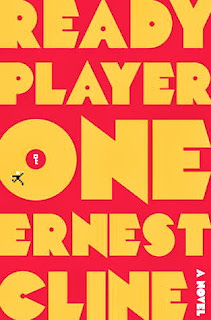 It's the year 2044, and the real world is an ugly place. Like most of humanity, Wade Watts escapes his grim surroundings by spending this waking hours jacked into the OASIS--a sprawling virtual utopia that lets you be anything you want to be, a place where you can live and play and fall in love on any of ten thousand planets.

And like most of humanity, Wade dreams of being the one to discover the ultimate lottery ticket that lies concealed within this virtual world. For somewhere inside this giant networked playground, OASIS create James Halliday has hidden a series of fiendish puzzles that will yield massive fortune--and remarkable power--to whoever can unlock them.

For years, millions have struggled fruitlessly to attain this prize, knowing only that Halliday's riddles are based in the pop culture he loved--that of the late twentieth century. And for years, millions have found in this quest another means of escape, retreating into happy, obsessive study of Halliday's icons. And then Wade stumbles upon the first puzzle. Suddenly the whole world is watching, and thousands of competitors join the hunt--among them certain powerful players who are willing to commit very real murder to beat Wade to this prize. Now the only way for Wade to survive and preserve everything he knows is to win.

I put off listening to this book because the subject matter didn't particularly interest me.  The world described in the book is more up my husband's alley.  He's the one into video games and Dungeons and Dragons. And while I was a child of the 1980's, I have no special affinity for that time period.  However, several of my blogging friends kept singing the book's praises and finally I relented.  I have no regrets.

Is the book heavy on eighties nostalgia?  Absolutely.  Did I get all the references?  Absolutely not.  Do I feel like I missed out as a result?  Not at all.

Wil Wheaton was the perfect Wade Watts.  His voice led me through Wade's quest to complete the competition and it was his voice that most led me to believe in and root for Wade.  I would have anyway. Rooted for Wade, I mean.  I could relate to him to some extent.  An awkward teen, mostly invisible to those around him. I really came to care for Wade and his friends and the bond they shared.  Each of them had their own struggles.  I felt the author captured the essence of young adults well in his characters.  At least this group.

A friend of mine's granddaughter is attending high school online this year, and I couldn't help but think of the virtual high school that Wade attends.  I am sure it is a different experience--the one my friend's granddaughter is having right now from the full sensory experience that Wade has in the future.  Technology advances are moving so fast, I wouldn't be surprised it Ernest Cline's vision of the OASIS isn't far from reality someday.

Wade and his online friends have never actually met.  It makes their friendship deeper and more real on one level because of the intimacies they share and the insignificance of appearances,  but more shallow on the other.  Do they really know each other?  How do they know they are who they say they are?  You also have the idea that these are people living their lives in a computer program, experiencing life through games and virtual worlds.  Their own reality is in bad shape and sorely neglected.  Poverty and an ailing environment are very real and big problems.  Is it any wonder than they would prefer to live in a virtual world?  And yet they miss out on so much.  How much real living can you do, locked into a computer all day and night?  And I think that is a big part of this story too.

While I was intrigued from the moment I began listening to the book, there were a couple moments early one when I worried I would get bored.  As Wade described the virtual world he "lived" in, I found myself starting to tune out.  Then Wade finds the first key and everything changes.  From that moment on, it was a near nonstop ride until the end of the book. I won my Binge Listener badge on Audible.  The book was intense and heartfelt.  There is action, a mystery, romance and plenty of humor to boot.  I was wrapped up in the characters lives, had become one of them, and couldn't wait to see everything come together in the end.

I am not sure I would have enjoyed the written version of the book as much as I did the audio version.  This is definitely one I am glad I took a chance on despite my earlier reservations.


You can learn more about Ernest Cline and his book on the author's website.
For more information about the narrator, Wil Wheaton, visit his website.