Bookish Thoughts: Litter of the Law by Rita Mae Brown 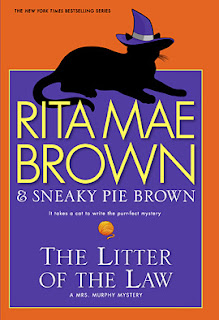 Autumn has descended and crops are being harvested all over Crozet, Virginia, ideal conditions for a scenic drive for Harry and husband Fair. Bucolic views are all well and good, but Harry’s nose for trouble leads her straight to a cornfield’s macabre scarecrow—an all too real murder victim that frightens all but the noisy crows.


This accountant’s gruesome death is only the first of many disturbing events in this normally pastoral corner of the world. While Harry tends her beloved grapes and sunflowers, a killer edges closer—as does Harry’s protective menagerie of animals.


Halloween’s approach brings with it bona fide terror and a beloved local tradition that threatens to become fatal. Rooting out the guilty in the treacherous center of a lucrative conspiracy requires Harry’s farmer’s wisdom—along with the quick wits and extraordinary senses of Sneaky Pie, Pewter, and Tucker. A vicious murderer may know the lay of the land far better than Harry does, but that’s about to change. It’s up to her vigilant four-footed companions to make sure that the unearthing of this plot is not Harry’s last act.

This time of year is perfect for cozies.  There is a chill in the air, the leaves are changing colors and falling from the trees, and there's a general sense of good will in the air.  Mostly, anyway.  Rita Mae Brown's Litter of the Law is a perfect cozy for the Halloween season, set in small town Virginia.  This was my first Rita Mae Brown mystery, believe it or not.  I have not read all that many cat mysteries, despite what my blog name may suggest.

I thought it was cute that the author's cat earned a spot on the cover as a coauthor, her contribution to the book being the animal conversations and activities, something which took me awhile to get used to.  I'm not used to cats, dogs, birds, mice and foxes talking--at least not in a book like this.  It grew on me though and by the end, I didn't mind so much.  It was comic relief.

The novel seemed to get off to a slow start.  Much time was spent setting the tone and atmosphere of the book.  Even after the first body is found, the mystery took its time unfolding. It was  nice change from the more fast paced books I've been reading.  A breath of fresh air.  Cozies tend to be like that for me.

Harry and I hit it off pretty quickly.  I love it when the heroine is close to my age.  I also could relate to Harry's love for animals.  Harry is not one to sit still when there is something to be done, nor will she keep her nose out of trouble when something isn't right.  After finding the body in the cornfield, Harry does her own digging, and the crime becomes more personal when someone she knows is targeted.  There's always a risk of an every day heroine's involvement in an investigation seeming too unbelievable, but it made sense in this instance.

Harry was just one of the many characters in the novel, each character very much their own person.  I especially liked Harry's husband Fair and Tazio, a young architect with a sense of history and culture.

In Litter of the Law, Rita Mae Brown brings attention to a very real issue that I think is worth noting (and the author does too, given she's written about it), and that is the fact that the federal government refuses to acknowledge Virginia Native American tribes, as a result denying these tribes legal standing, being able to claim historical and cultural artifacts and gaining access to federal programs that other recognized tribes have access to, among other things.  Tribes long discriminated against continue to be victimized in this day and age.

I enjoyed reading Litter of the Law, and am eager to read more by Rita Mae Brown.

(Good)
You can learn more about Rita Mae Brown and her books on the author's website.