Bookish Thoughts: Help for the Haunted by John Searles 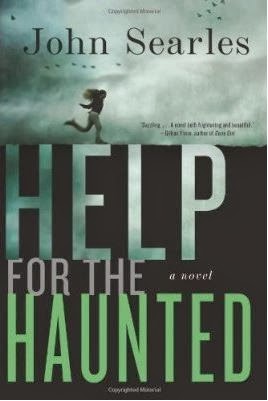 Help for the Haunted by John Searles
William Morrow, 2013

It begins with a call in the middle of snowy February evening. Lying in her bed, young Sylvie Mason overhears her parents on the phone across the hall. This is not the first late-night call they have received, since her mother and father have an uncommon occupation, helping "haunted souls" find peace. And yet, something in Sylvie senses that this call is different than the rest, especially when they are lured to the old church on the outskirts of town. Once there, her parents disappear, one after the other, behind the church's red door, leaving Sylvie alone in the car. Not long after, she drifts off to sleep only to wake to the sound of gunfire.

Nearly a year later, we meet Sylvie again struggling with the loss of her parents, and living in the care of her older sister, who may be to blame for what happened the previous winter.

As the story moves back and forth in time, through the years leading up to the crime and the months following, the ever inquisitive and tender-hearted Sylvie pursues the mystery, moving closer to the knowledge of what occurred that night, as she comes to terms with her family's past and uncovers secrets that have haunted them for years.


This is one of the more popular books this fall and although it's taken me awhile to get to it, I finally did.  Now I know what all the fuss is about--and I have to agree; it's worth it.

I love a good thriller and John Searles wastes no time in his latest novel, Help for the Haunted, setting the scene and pulling the reader right into the book.  The story is narrated by teen-aged Sylvie, a bright girl who is basically good through and through.  She was her parents' obedient daughter, the one who they could trust to do as she was told, unlike her older sister Rose who seemed to rebel at every turn.

I grew to really like Sylvie and care for her.  Her parents were brutally murdered, and she is lucky to be alive.  As she recounts the tale of her parents's lives and their murder, we get a strong sense of who her family was, what they meant to her, and just how deep their secrets went.  I appreciated Sylvie's honesty and naivety.  It gave the narration a more authentic feel.  Sylvie had an inner strength that was undeniable.  My heart broke for her at every turn while at the same while I admired how resilient she was, and how resourceful.

When I first began reading Help for the Haunted, I wasn't sure what kind of novel I was getting myself into.  Was it a ghost story or more of a crime fiction novel?  Was it a good mix of both?  I liked how the author worked the paranormal into the mystery, really leaving it up to the reader what to believe.  Much of what happens can be explained away, and yet there is just enough to make you wonder on the other hand. It really can go either way, depending on the reader.

The author strikes a good balance between plot and characterization.  The characters are all fully developed, and the plot is well set with plenty of twists to keep the reader guessing, including this reader which can be hard to do.

I had such fun reading this atmospheric novel, and had a hard time putting it down. I hope to go back and read the author's back list and look forward to seeing what he has to offer in the future.

You can learn more about John Searles and his books on the author's Facebook Page.