Bookish Thoughts: What's a Witch to Do? by Jennifer Harlow 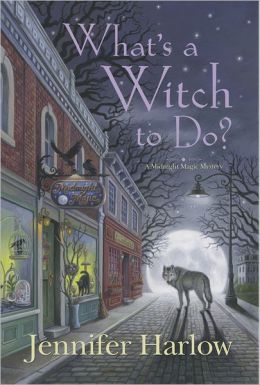 I like cozy mysteries just fine, but there's something to be said for adding in an element of the paranormal.  So, when I came across this title, I couldn't resist.  It looked like it would be a light fun read, and I was right!

A suspenseful brew with a dash of passion High Priestess might sound like an ’80s hair band, but its Mona McGregor’s life. She runs the Midnight Magic shop in Goodnight, Virginia, and leads a large coven. She’s also raising two nieces and hasn’t been with a man for fifteen years…until a handsome doctor takes an interest in her. But Mona’s life really heats up when Adam Blue, a sexy werewolf, arrives at her door. Adam informs her that someone wants her dead and he is there to protect her. Hell’s bells! When a demon begins stalking her, Mona has to suspect her coven members, and even her family.

What's a Witch to Do is the first in a new cozy mystery series, a spin off of the author's F.R.E.A.K. series which I have yet to read.  If you haven't read the other, don't worry.  You'll manage just fine.  Right from the opening of the book, it's clear Mona has a lot going on in her life.  I found What's a Witch to Do? to be a fast-paced suspenseful romp.  It was a bit predictable, but, I often find books like this to be so--and I don't really mind.

There was a lot to like about Jennifer Harlow's book and about her characters.  I loved the interaction between Mona and her nieces.  It's obvious she really cares about them and will do anything for them.  The two young girls seem older than their ages, but given their past--at least the hints we are given--it's really no wonder.

I love that Mona isn't your typical urban fantasy type heroine.  Yes, she's a strong woman who isn't afraid to speak her mind, but appearance wise, she's not exactly Angelina Jolie (and I am so tired of heroines who eat anything they want and don't gain weight!).  Mona can hold her own though, especially when it comes to working out problems.  I like that Mona is modest, even despite her position as high priestess.  She truly cares about those around her and isn't afraid to ask for help when she--or others--need it.

There's plenty of action with a side of romance as Mona tries to figure out who is out to get her.  There's a definite southern small town feel to the novel with the genial hospitality and the gossip that spreads like wildfire.  I enjoyed getting to know the people of Goodnight, and look forward learning more about a few favorites in future books.


You can learn more about Jennifer Harlow and her books on the author's website.