Ah, young love . . . Such intensity! Such romance! What if you were a teenager, barely living, grieving the loss of your parents in a terrible accident, and you find yourself falling for a handsome young man—only, he isn’t really so young? What if it turns out he has a secret? He’s immortal, a Revenant. He saves lives, sometimes dying in their place, only to be reborn again at the same age as his initial death. Would you pursue the love or turn on your heels and run, not able to stomach another death of a loved one, even knowing it is likely temporary? 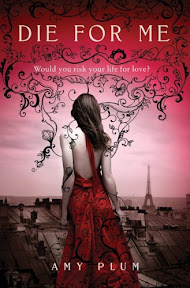 Kate finds herself in exactly that predicament. Having left her home in the U.S. after her parents’ death, she and her sister try to rebuild their lives in Paris with their grandparents. At first, Kate cannot believe someone like Vincent could be interested in her—he’s charming and good looking. She’s, well, she doesn’t think too much of herself. Her older sister is the gorgeous one, the one boys gravitate towards. Kate is more of an introvert, books and museums being her escape. Her sister, Georgia, is gregarious and loves the party scene. Despite their differences, the two sisters are close. Besides their grandparents, they are all they have left.

In Die for Me by Amy Plum (HarperTeen, 2011; Fantasy, 352 pgs), the reader is introduced to the characters, getting to know both Kate and Vincent as well as their friends and family. Kate is overwhelmed by this new world she finds herself in—and in danger. The Revenants have a deadly enemy—one that is the same as them only the opposite. Immortals who kill humans instead of saving them. The two sides are constantly fighting, each trying to take the upper hand.

Amy Plum's Until I Die (HarperTeen, 2012; Fantasy, 368 pgs) takes the story further. Kate and Vincent want to be together, only both know that Kate is reluctant. They each set off on their own to try to find a way to make that happen—to either turn Vincent human or make it easier for him to fight the compulsion to die repeatedly while saving lives. Meanwhile, the Revenants are on age, sure their enemy, the Numa, are planning for a big attack. No one is safe and everyone’s lives are in danger, including that of the immortals.

It is an interesting twist to a traditional story—a new take on it really. Amy Plum has created characters that are easy to care for, even if they seem straight out of a CW television show. Kate is such a typical teenager—in her mannerisms, thought processes, and worries. The author did a good job of capturing the essence of a teenaged girl, I thought, at least one type of teenaged girl. Kate is naïve and innocent in many ways, but also strong willed and smart. Vincent at times seems too good to be true—but he sure is dreamy. 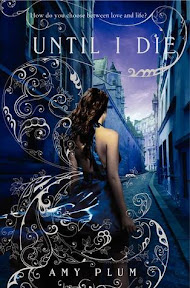 I have never been smitten with Paris the way some are, but the author certainly has me reconsidering. I loved her descriptions of Paris, how romantic she made it sound.

Amy Plum spent quite a bit of time in the first book explaining (through dialogue) the world she was creating. I was reminded of Archon by Sabrina Benulis, a book I read earlier in the year, in which I felt the author spent too little time setting up her world for the reader. My preference would be for something in between the two books—one had a bit too much and the other not enough. Although, in both cases, I eventually was carried away by the stories and the worlds created.

As a result, I enjoyed the second book in the Revenant series more than the first—all that explaining already out of the way. Don’t get me wrong. The first book was still good. In both books, there was plenty of romance and teen angst, action and self-discovery. I hated the ending of the second book, if only because I have to wait now for the third book. I blame Marg who recommended the books in the first place. And the author who clearly wanted to torture her readers.

I admit I am not a huge Young Adult fiction fan (although I like what I've read well enough), and so my experience reading this category of books is rather limited. Reading the books, it’s clear the intended audience is younger, although I still enjoyed them and look forward to reading the next book. Okay, so I can’t wait to read the next book, Hurry up, Ms. Plum!

Source: I purchased e-copies of both books.