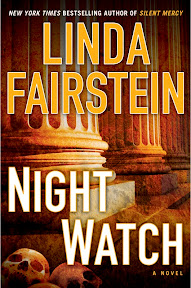 
I was first introduced to Alexandra Cooper, one of New York's Assistant District Attorneys, in 2006, when I went on a series reading binge. I read several of Linda Fairstein’s books that year, often back to back. Over the years, I was pretty good about keeping up to date with the series—I had to have my Alex Cooper fix—until about four years ago when I somehow fell behind. I’ve since caught up and now feel sort of lost. Lost in that way where I miss the characters and wish I had at least one more book in the series to go still.

Night Watch is the 14th book in Linda Fairstein’s legal thriller series featuring Alex Cooper. Alex is the head of the Sex Crimes Unit and doesn’t hesitate to get right down in the trenches with the detectives when it comes to investigating crimes—or witness credibility as the case may be in the latest series' installment. Night Watch is slightly different from much of the rest of the series in that Alexandra’s personal life is brought to the forefront for much of the book.

With plans to spend a romantic week with her lover, world renowned restaurateur Luc Rouget, the two settle into Luc’s home town of Mougins in France. It’s such a different life from her usual one and Alex is determined to enjoy every minute of it. It doesn’t take long, however, for trouble to come her way. Skulls and bones outside Luc’s door and a dead body with a clue suggesting a connection between the deceased and Luc . . . Things suddenly begin to take a turn for the worst. But before Alex can fully process these events, she is called back to New York to assist with a particularly high charged case that has become a media circus. A powerful and wealthy man of international renown is accused of raping a maid at a hotel.

Alex returns to New York only to find a mess—and she’s the one who has to try to clean it up while not rocking the boat too much. The rape case is a political nightmare given all the power players involved—especially given the fact that the victim hasn’t been completely honest about her background. If that wasn’t enough, another body is discovered, another murder somehow tied to Luc.

Linda Fairstein takes readers into the finest restaurants not only tempting my appetite with food but also their history. Given the exclusiveness and price range of many of these restaurants, I doubt I will ever visit them, but I still found them fascinating—the hidden doors, the wine cellars and basements, included. Fairstein never fails to include some New York history in her books and Night Watch was no exception. It’s one of my favorite characteristics of her books.

Alex is a strong female character—and she has to be given her occupation. She doesn’t back down easily and often takes risks. In Night Watch, she is shown in a much more vulnerable light. She is really shaken by Luc’s situation. It is personal this time and much of what takes place in the novel—including her current case—are outside of her control. She does what she can, but it’s clear that Alex is overwhelmed and the cracks are showing. I really appreciated that fact and felt that the author did an excellent job of bringing her character through it.

Another facet I especially liked was the interplay between Alex and Mike. The two have such an interesting relationship, best friends for years, and Alex has taken more from him than I ever would. I admit I have never been a big fan of Homicide Detective Mike Chapman. His sense of humor annoys me more than makes me laugh. Still, in the past four books of the series, he’s finally growing on me and after Night Watch, I can actually say I like him.

I was sorry to see Night Watch come to an end, if only because I am not ready to let go of my New York friends just yet. Night Watch is a great addition to the series. Linda Fairstein’s books continue to get better and better with each installment.


To learn more about the Linda Fairstein and her books, please visit the author's website.

Many thanks to the TLC Book Tours for the opportunity to be a part of this book tour. E-copy of Night Watch provided by the publisher.